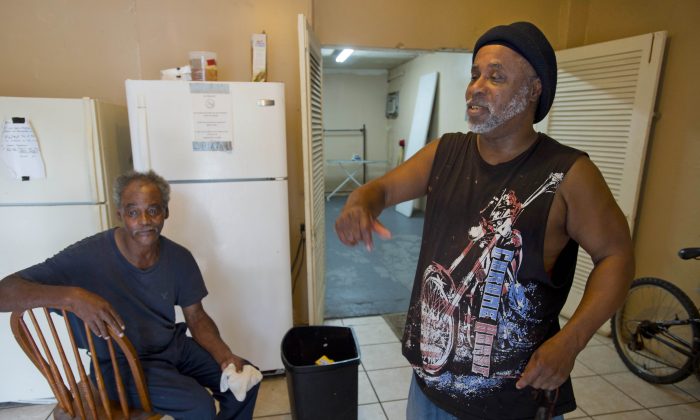 David Solomon, 60, left, and Calvin Wilson, 56, right, say they lived with Alton Sterling at the Living Waters Outreach Ministry Drop-In Center, and don't believe he carried a gun, on Tuesday, July 5, 2016, in Baton Rouge. Sterling was fatally shot during an altercation with Baton Rouge Police in the early morning hours of Tuesday, outside a Baton Rouge convenience store. (Travis Spradling/The Advocate via AP)
Crime and Incidents

Officers responded to the store about 12:35 a.m. Tuesday after an anonymous caller indicated a man selling music CDs and wearing a red shirt threatened him with a gun, said Cpl. L’Jean McKneely.

Two officers responded and had some type of altercation with the man and one officer fatally shot the suspect, McKneely said. Both officers have been placed on administrative leave, which is standard department policy, he said.

The store’s owner, Abdul Muflahi, told WAFB-TV that the first officer used a Taser on Sterling and the second officer tackled the man. Muflahi said as Sterling fought to get the officer off of him, the first officer shot him “four to six times.”

The owner said Sterling did not have a gun in his hand at the time but he saw officers remove a gun from Sterling’s pocket after the shooting.

Anger grows after US policeman kills Alton Sterling, a black man who was pinned to the floor https://t.co/AGg5AXaEWu pic.twitter.com/I1BpwSzf8Z

McKneely said late Tuesday that he could not confirm Muflahi’s description of the alleged event or any other details of the investigation.

The Advocate reported a crowd of people protesting the shooting gathered late Tuesday afternoon at the store where it took place. The group grew to over 200 people, who chanted and waved signs late into the night, according to the newspaper.

The Latest: Police: Wal-Mart Incident Not Tied to Terrorism