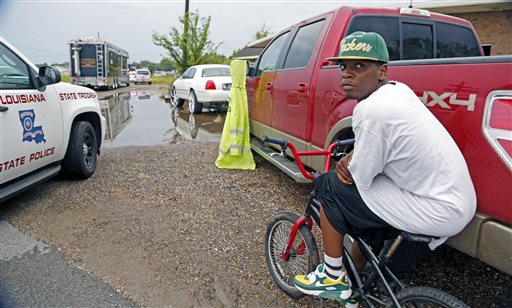 Richardo Miles, 25, waits for word on the status of the three hostages in the Tensas State Bank branch in St. Joseph, La., Tuesday, Aug. 13, 2013. A man whose family owns a store across the street from the bank took three bank employees hostage, and a state police negotiator has been talking to him for hours, police said. (AP Photo/Rogelio V. Solis)
News

The gunman who held three people hostage at a Tensas State Bank in St. Joseph, Louisiana, was killed by police on Wednesday morning after a long police standoff.

Mark Boyle with KSMO and CNN reported that the gunman was killed.

“Louisiana bank gunman dead and two hostages clinging to life after being shot by gunman. Both in critical condition,” he tweeted.

Earlier, three ambulances escorted by police were seen coming from the bank, reported the News-Star.

One of the hostages was released earlier.

Edmonson said told CNN that he was not sure “what statement (the suspect) was trying to make or (if) something … just went bad,” noting was “no reason for him to want these particular individuals in the bank.”

The Associated Press reported earlier that the gunman had an automatic rifle.

Edmonson said the gunman went into the bank to rob it originally before it turned into a hostage situation.

“I wouldn’t expect something like that to happen here. It’s just bizarre,” Mayor Edward Brown told the paper. He said he saw the gunman earlier in the day and nothing seemed out of the ordinary.