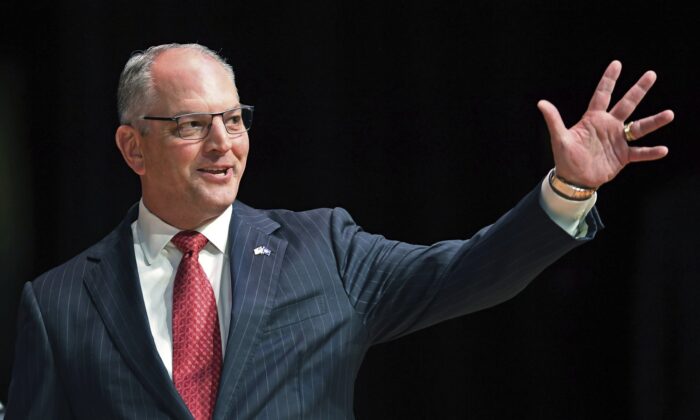 Gov. John Bel Edwards acknowledges his supporters as he comes out onstage for a debate with Eddie Rispone and Republican Rep. Ralph Abraham in Baton Rouge, La., on Sept. 19, 2019. (Bill Feig/The Advocate via AP)
Politics

Louisiana Gov. John Bel Edwards’ quest for a second term as the Deep South’s only Democratic governor will stretch over another month, as voters in his state denied him a primary win on Saturday, Oct. 12, and sent him to a runoff election.

The Democratic incumbent was unable to top 50 percent of the vote in the six-candidate field.

“We’ve got a little more work to do,” Edwards told supporters Saturday night. He added: “My fellow Louisianans, we are not going backward. That is exactly what Eddie Rispone would have us do. He wants to put us right back on the path that led us into the ditch.”

Rispone said Abraham called to congratulate him on the race and immediately offer his support.

“With your prayers, we’re going to win. This is just the first step,” Rispone said to cheering supporters. “We’re going to turn this state around.”

President Donald Trump took credit for keeping Edwards from an outright victory after he made a last-minute appeal to Louisiana’s voters to reject Edwards.

He wrote in a tweet that Edwards “has done a poor job. NOW HE IS IN A RUNOFF WITH A GREAT REPUBLICAN, @EddieRispone. Thank you Louisiana!” He added that support for Edwards dropped “after I explained what a bad job the Governor was doing.”

The Governor of Louisiana, John Bel Edwards, has done a poor job. NOW HE IS IN A RUNOFF WITH A GREAT REPUBLICAN, @EddieRispone. Thank you Louisiana! 66% down to 47% after I explained what a bad job the Governor was doing.

Congratulations to the Great State of Louisiana. A big night. You will soon have a new and wonderful Governor, @EddieRispone. Your Taxes and Car Insurance Payments will go DOWN!

Edwards holds more socially conservative views than many in his party.

The West Point graduate and former Army Ranger opposes abortion and gun restrictions, talks of working well with the Trump administration on criminal justice reform and calls the U.S. House Democrats’ impeachment inquiry a distraction to governing in Washington. He signed one of the nation’s strictest abortion bans.

Throughout his campaign, Edwards sought to make the election a referendum on his performance rather than a commentary on Louisiana views on national politics.

The Democratic incumbent contrasted three recent years of budget surpluses with the deficit-riddled terms of his predecessor, Republican Bobby Jindal. Edwards and the majority-Republican state Legislature passed a tax deal that stabilized state finances and allowed for new investments in public colleges and the first statewide teacher raise in a decade.

“When I took office, the state of Louisiana had the largest budget deficit in our history,” Edwards said. “We did the hard, bipartisan work necessary to right the ship, to strengthen our economy.”

Rispone, 70, founder of a Baton Rouge industrial contracting company, describes himself as a conservative outsider.

“We need a CEO, someone with serious business experience,” Rispone told supporters. “Both sides of the aisle have failed you. It’s time to do something different.”

He pledged to hold a state constitutional convention to rewrite provisions dealing with the budget and taxes, state employee protections and education. He also promised to cut taxes.