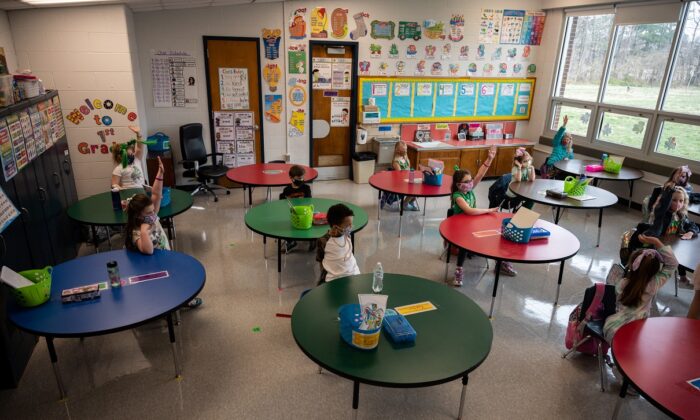 Students raise their hands to answer a teacher’s question during a socially distanced classroom session at Medora Elementary School in Louisville, Ky. on March 17, 2021. (Jon Cherry/Getty Images)
By Mark Tapscott

A Loudoun County Public Schools (LCPS) teacher asked a Virginia court on June 2 to lift his suspension for opposing a proposal requiring instructors to use transgender students’ preferred pronouns.

Tanner Cross spoke briefly against the proposal during a May 25 Loudoun County Board of Education public meeting, then was told by letter two days later that he had been suspended pending further investigation “of allegations that [he] engaged in conduct that had a disruptive impact on the operations of Leesburg Elementary School.”

Cross was barred from entering any LCPS building without prior permission and was required to be available without prior notice for meetings with school officials concerning the investigation of his conduct.

Attorneys with the Alliance Defending Freedom (ADF), an Arizona-based public-interest law firm that specializes in First Amendment and religious liberty litigation, first asked LCPS officials to lift their suspension, then filed the suit (pdf) in the Loudoun Circuit Court against the Loudoun County School Board when it became clear the suspension and investigation of Cross would continue.

“The core of constitutional liberty in a free society—the ability to comment on public policy under consideration without fear of retaliation—is at stake in this case,” Cross’s ADF attorneys told the court.

“This is doubly so because the policy in question concerned whether the school district would take one side in an ongoing debate about some of the deepest and most difficult questions about who and what we are as human beings, and then compel teachers to affirm that same side with their own mouths, even when their religious beliefs command them to do otherwise.

“Mr. Cross used his constitutional right to speak up in the hope of persuading the board not to go down the unconstitutional trail the policy would blaze.

“Mr. Cross hoped that the board would instead follow the ‘fixed star in our constitutional constellation … that no official, high or petty, can prescribe what shall be orthodox in politics, nationalism, religion, or other matters of opinion or force citizens to confess by word or act their faith therein.’ (West Va. Bd. of Educ. v. Barnette, 319 U.S. 624, 642 (1943).

“In response, Mr. Cross was met with a separate, immediate violation of his rights, a retaliatory suspension and prior restraint on his speech.

“To preserve the most fundamental constitutional freedom in this Commonwealth, he therefore asks this Court to grant his motion for a preliminary injunction.”

The suit stated that Cross’s objection to the proposal is a result of the understanding of children he’s gained from 15 years as a teacher and his Christian faith.

“Mr. Cross understands that, because of the difficulty of assessing matters of gender identity and the long-term irreversible consequences of certain treatments for transgender-identifying people, including hormone replacement therapy and sex-reassignment surgery, children should not be encouraged to undertake social or medical transition because of their inability to assess long-term consequences,” the suit stated.

“Mr. Cross believes that any policy that encourages children to undertake social or medical transition, especially without parental involvement, is harmful to children.

“Mr. Cross is also a Christian, and he strives to act consistent with his faith at all times. Mr. Cross has sincerely held beliefs about human nature, marriage, sexuality, morality, politics, and social issues rooted in his Christian faith.

“Respecting sex and gender identity, Mr. Cross believes that God creates each person as male or female; that the two distinct and complementary sexes reflect the image of God; and that adopting a gender identity inconsistent with sex rejects God’s image and design for a person and does harm to that person.”

Wayne Byard, public information officer for LCPS, told The Epoch Times the school system is unable to comment on the Cross suit because “state and federal law concerning confidentiality limits what Loudoun County Public Schools can say on this matter. I can confirm that Mr. Cross has been put on administrative leave with pay.”

Asked for specific citations of state and federal law that bar LCPS from responding to questions about the Cross litigation, Byard said only “FERPA and the Virginia Code,” without pointing to specific provisions.