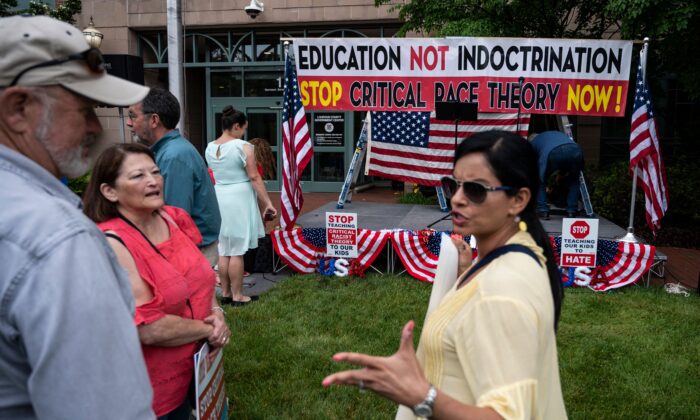 People talk before the start of a rally against critical race theory being taught in schools. at the Loudoun County Government center in Leesburg, Virginia on June 12, 2021. (Andrew Cballero-Reynolds/AFP via Getty Images)
Big Tech, Censorship, and Socialism

Parents in Loudoun County Public Schools (LCPS), Virginia, who want to view a new critical race theory (CRT)-influenced curriculum being taught in their child’s school have to sign something similar to a non-disclosure agreement (NDA) to view the program.

To review the “Second Step” curriculum, parents must acknowledge that the presentation of the material is “not a public event” and acknowledge that “copying, broadcast or recording of any kind is prohibited.”

“LCPS is partners with Southern Poverty Law Center, Racial Equity Tools, and Learning for Justice (SPLC), all of which have copyrighted material, however, LCPS freely provides access to these materials,” Mineo said. “Why is there such a double standard when parents want to review Second Step SEL material in its entirety?”

The “Second Step” curriculum is part of a program on “Social Emotional Learning” from the Committee for Children, a nonprofit that advertises “free anti-racism and anti-bias resources.”

The Second Step website promotes “social-emotional learning.” The website also includes material on so-called anti-racism and anti-bias while saying it is “committed to addressing racial injustice and helping you drive real change in your school communities.” According to the organization, the purpose of the materials is to “implement social-emotional learning in a way that builds on students’ cultural assets, critically examines systems of power, and develops better ways of teaching, learning, and being.”

Before viewing the Second Step Program, parents must acknowledge the materials can only be used in the classroom by educators.

The “terms and conditions” agreement, citing copyright as the reason for the document, states, “LCPS may make an ‘Authorized Presentation’ (defined below) of Materials to parents whose student(s) is/are currently enrolled in a school in LCPS (the ‘Eligible Parents’), through July 31, 2022 (or expiration of your current Second Step license, if earlier) (the ‘Display Term’).”

Eligible parents “must agree in writing to comply with the terms of this Special License, by signing in the space provided below, in advance. LCPS will retain copies of the Eligible Parents’ signed agreements, and provide copies of them to CFC upon request.”

The Committee For Children did not immediately respond to a request for comment.

Loudoun County has become a focal point for CRT with parents attending school board meetings to ask questions about why CRT, which based on Marxist critical theory, is being taught in schools. CRT, often billed under the title of equity and racial justice, is rooted in the idea that American institutions and systems are racist and dominated by white supremacy.

Loudoun County School District told Fox News that students are staff are not indoctrinated with CRT.

“The interim superintendent has never denied that critical race theory is discussed at Loudoun County Public Schools. What he has stated is that students and staff are not indoctrinated into any school of thought or philosophy.”