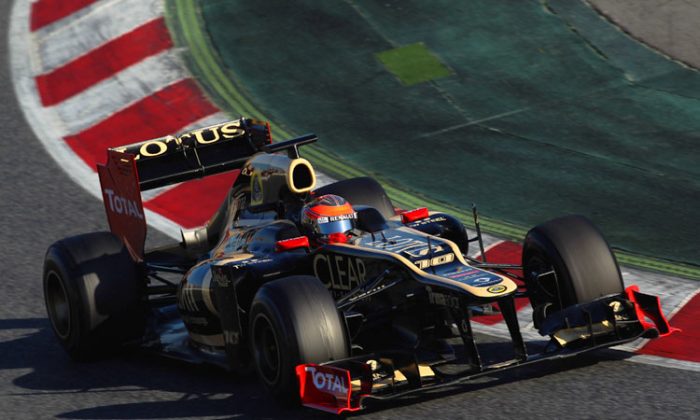 For the second day in a row, Romain Grosjeans’ Lotus E20 has lapped Barcelona’s Circuit de Catalunya faster than any of its Formula One rivals at F1’s final preseason test session.

Grosjean’s best lap was .638 faster than his chart-topping time of the day before; in fact, his Thursday time was quicker than the rest of the field’s Friday time save for the 1:23.162 of Jean-Eric Vergne in the Toro Rosso.

“I’m very happy with the car, and it was great that we could still run strongly at the end of the session, even after a long stint,” Grosjean said on the Lotus F1 website. “Today was the first race distance I’ve completed in a long time and I’m feeling pretty good. No doubt my neck will be a little sore tomorrow, but the rest of me is fine!”

“Of course it is a shame my winter testing ended with a less than satisfactory day, with not so many laps completed,” said Vergne. “However, yesterday we did a lot of running and the team still has two more days here with Daniel [Ricciardio] and I believe we can therefore make up for lost time.

“The day was not a complete wash-out, as we got some useful data in the morning and did yet more pit stop practices this afternoon. Since Jerez, the team and I have worked very hard to get me as ready as possible for the season and now, I’m looking forward to taking part in my first ever Grand Prix when the championship starts in Australia.”

Kamui Kobayashi came in sixth in the Sauber, though hydraulics problems in the afternoon prevented the team from doing a race-distance test. The morning session was interrupted by red flags for among other things; fog, which stopped testing and forced the session to be extended later in the day.

“With regard to our lap times, we are quite happy with today’s achievements,” Giampaolo Dall’Ara, Sauber’s head of track engineering, told formula1.com. “In terms of running through our program, we have been a bit unlucky. For us today the red flags always came out at the wrong time. But this is how it goes, and we have also had days when interruptions didn’t do us any harm.

“However, today it was difficult to find a good rhythm, and then later on we lost more than an hour due to a hydraulic leak. The fact that we had to remove the gearbox to fix it was very time consuming. Overall we gained some good experience with the car, and there is still more to be learned about it.”

Teams will test for two more days, preparing for the season-opening Australian Grand Prix on March 18.