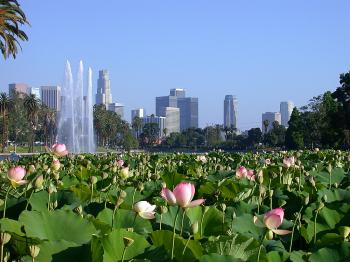 LOTUS FLOWERS IN ECHO PARK LAKE: As they appeared before dying out in 2008. The Lotus flowers are expected to be back in 2010. (Dan Sanchez/The Epoch Times)
US

Lotus Festival: Where Have All the (Lotus) Flowers Gone?

Those enjoying this warm Sunday, July 14, filled the grassy area near the main stage on lawn chairs and picnic blankets, as children danced and swayed along to the eclectic music. Among the performances were Ho’aloha Polynesian Dancers, Rural Dance from Bangladesh, and the Hsi Lais Temple Folk Dance, wearing ornate and flowing costumes in orange and green.

Everything you could hope for and expect from the Lotus Festival was there, including fireworks and dragon boat races, except for the lotus flowers themselves!

Celebrating its 31st year, the festival was established in 1972 to foster an understanding and appreciation of the various Asian and Pacific Islander communities while offering the public a full weekend of cultural events.

The festival coincides with the annual blooming of the lotus flower which is sacred in the Hindu, Buddhist, and Egyptian religions.  Because the Lotus is a type of water lily, which grows out of muddy waters emerging as a beautiful bloom, it represents humans who have the potential to triumph through the turmoil of this world and achieve enlightenment, making it a symbol of purity and resurrection.

Jane Kolb, Public Information Director of the Los Angeles Department of Recreation and Parks said, “We honestly don’t know why they died out.”

Among the theories offered about the troubling disappearance of the treasured Echo Park Lotus bed is urban pollution, changes in water temperature, a build up of sediment at the bottom of the lake, and/or turtles and ducks nibbling at the tender lotus shoots.

Eager to rectify the situation, both for the immediate and long-term, the problem is being addressed in two ways; the Huntington Arboretum is running tests by planting 9 test pots containing two lotus tubers each as a way to regulate and observe the flowers; while the Echo Park Lake Rehabilitation Project will work on improving water quality, and the lake’s wild life.

Kolb explained that in two years the lake will be drained, affirming, “We will have lotus beds when it is refurbished.”

If the Lotus is a symbol of prevailing through life’s obstacles, no doubt the effort to bring them back will succeed. And as far as the estimated 100,000 people in attendance, the event was already a great success