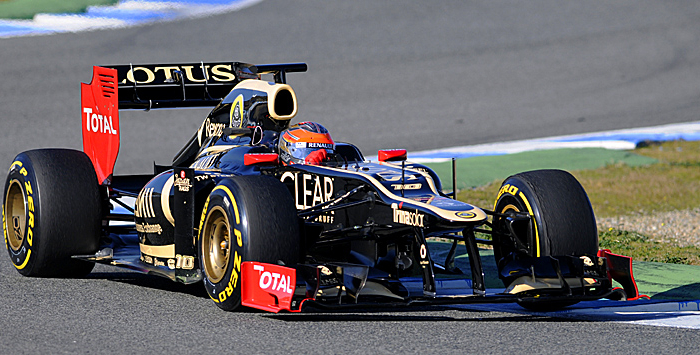 Lotus F1 has been forced to withdraw from the season’s second test session, at Barcelona Spain, due to chassis problems with its new E20-02.

The team originally decided to resume the test with the E20-01 chassis it used at last week’s test at Jerez, but computer simulations done at the team’s Enstone, England factory revealed the same problem, so Lotus canceled its test entirely.

“Before we were due to fly chassis E20-01 out to Barcelona in replacement of chassis E20-02, we ran a series of simulations at the factory based on the data provided by our brief running on track today,” said Technical Director James Allen on the Lotus F1 website.

“As a result, we were able to identify an area which requires some additional work. It will be more productive for us to carry out these modifications to both chassis at Enstone rather than send E20-01 out to this week’s test. We’ll put the right measures in place and we will be able to fix the problem before next week.”

Lotus, with drivers Romain Grojean and ex-champ Kimi Raikonen, was fastest of all the 2012 models tested at Jerez. The team had hoped to build on that at Barcelona.

“Not running this week has been a tough decision to take, but we feel that our choice is the right one,” team principal Eric Boullier said on the team website.

“On the positive side, we have quickly identified the issue with the chassis, and our design office has already devised a solution. We will be present at next week’s test in Barcelona.

“We draw faith from the fact that the E20 was quick out of the box in Jerez and showed its reliability there. We have a lot of work ahead of us over the next week but everyone at Enstone is ready for this challenge.”