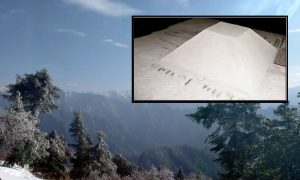 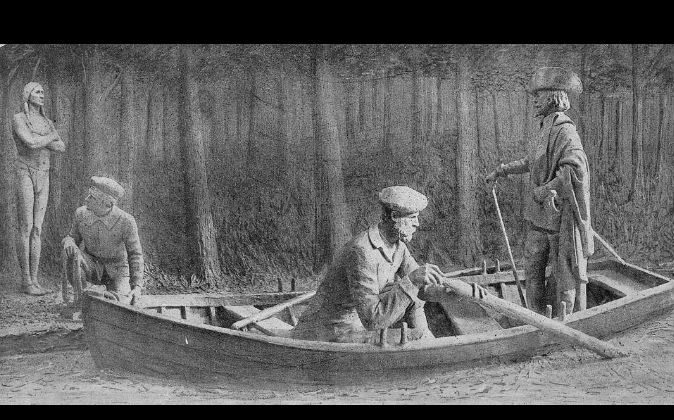 A sculpture of the meeting of Jacques Cartier and Donnacona. (Public Domain)
Beyond Science

Legends of the Kingdom of Saguenay, a lost city supposedly ruled by blonde men rich with gold and jewels, were part of the reason France made territorial claims in Canada. No one knows if Native Canadians in 1534 and 1535 hoaxed Frenchmen, and later a French king, with their tales of gold, ruby, and silver mines to the northwest of present-day Montreal. Were they lying or were the legends a memory of visiting Vikings?

Jacques Cartier arrived in Newfoundland, thinking it was Asia, in May 1534. He explored the Canadian maritime area, claimed it all for France, and captured two Natives and took them back to France. Sponsors financed a second voyage in 1535, and Cartier and crew made their way via the St. Lawrence River from the Iroquoian capital of Stadacona to Hochelaga, which is now called Montreal.

They said the people were numerous, law-abiding, dressed like the white men, and had white skin.

Joseph Edward King wrote, in an article titled “The Glorious Kingdom of Saguenay” in the Canadian Historical Review of December 1950: “The following spring [1535], the captain-pilot embarked once again in quest of treasures, and the two Indians sailed with him. His little flotilla crossed the North Atlantic, and, as it worked westward past Anticosti Island into the St. Lawrence, the homecoming aborigines, claiming to recognize the landmarks, announced that only two days’ journey to the west began the limits of the Kingdom of the Saguenay.

“In this manner, on Friday, August 13, 1535, the fabulous domain of Saguenay came into the white man’s ken. For a decade this was to be an ignis fatuus [something deceptive or deluding] for French explorers. The Canadian tribe of Indians, kinsmen of the pair who had been to France, made only occasional and fleeting references to Saguenay, and it was not until October that the French learned more about it.”

Cartier returned to Stadacona in October but was iced in and so had to spend the winter with the indigenous people. King wrote that over the course of the winter the Europeans and Natives occasionally discussed the Saguenay kingdom. The Natives told Cartier and his French crew that the Sanguenais’ lands had large amounts of gold, copper, rubies, and other valuable resources. They said the people were numerous, law-abiding, dressed like the white men, and had white skin.

At the end of the winter, during which many of Cartier’s men had died of scurvy, Cartier urged Chief Donnacona of the Iroquois to accompany him to France to tell the French king the story of the rich Kingdom of Saguenay.

Donnacona went to France and met with Francis I sometime in 1537 or 1538. Apparently the king’s interest was piqued, but war with the Holy Roman Empire drained France’s treasury, delaying Cartier’s return to Canada. Donnacona, though he was treated well, died in France.

It has been claimed that Cartier kidnapped Donnacona to take him to France. Cartier had earlier forced two natives to return with him to France, so if he did kidnap Donnacona, Cartier had already established a modus operandi.

The war in Europe ended, and in 1541 King Francis ordered another Cartier expedition to Canada to find the Kingdom of Saguenay. Francis later appointed another Frenchmen, Jean Francois de la Rocque, as regent of Canada. The regent arrived in 1543 and met with Cartier, who showed him diamonds, gold, and pearls purportedly from Sanguenay. Roberval left for the region to the northwest said to be the rich Saguenay kingdom and “found exactly nothing there,” as EsoterX puts it.

Spanish conquistadors, too, longed for a lost kingdom of gold, El Dorado.

Scholars have theorized variously that the Natives were tricking the gold-obsessed French, or the Natives actually believed in the rich kingdom after their ancestors met in previous centuries with Norse explorers or Vikings and passed down stories. Another theory is that there actually was a rich kingdom to the northwest at one time.

Spanish conquistadors, too, longed for a lost kingdom of gold, El Dorado. Various Spanish expeditions searched South America for it in futility.