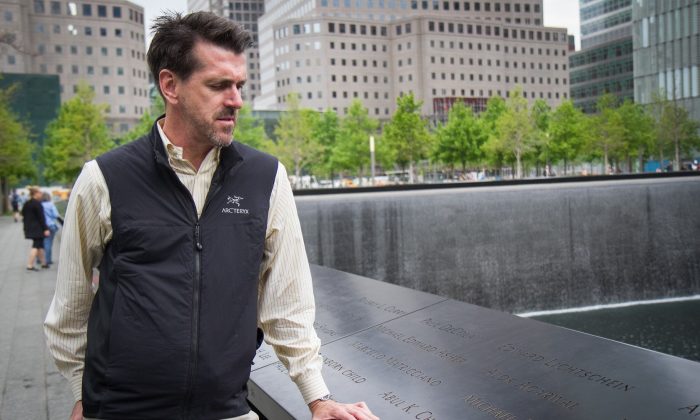 John Herbst looks at his friend's name, Michael L. Collins, on the bronze parapets at the Sept. 11 memorial in New York City on May 21, 2014. (Benjamin Chasteen/Epoch Times)
New York

Lost in Thought at 9/11 Museum Opening

NEW YORK—In the midmorning hours of May 21, John Herbst, a neatly dressed man wearing oxfords and a light vest wandered slowly around the Sept. 11 memorial. He stopped some distance in front of the bronze parapets that encircled the twin memorial pools. “There,” he pointed to the names engraved in bronze. “There is Michael Collins’s name.”

Collins was a trader for Cantor Fitzgerald. He had been in the tower when the plane hit. Meanwhile Herbst, who lived on the same floor as Collins during college, watched in indescribable horror from his office window in Midtown.

“You could see it fall over,” he said. His voice broke.

Although Herbst had been to the memorial before, a thousand thoughts trampled through his head and he was not quite sure what to make of the plaza or the museum that he has yet to enter. “It’s so strange,” he said repeatedly.

There was a striking silence that was almost meditative if one did not think about what had occurred there. The only sounds on site were the waterfalls, softly streaming into the pools, for the bulk of the media had just gone inside the museum across from the memorial.

Herbst felt apprehensive about visiting the September 11 Memorial & Museum, which opened to the public for the first time that morning.

“It’s really strange having the remains on site,” he said. “It’s good for family members that they have a place to come, it’s almost like going to a grave. But the whole tourist-attraction aspect of it is unsettling.”

To go or not to go? That is the question in many New Yorkers’ minds. As a New Yorker, Herbst lived through the catastrophe. Why experience it again in a museum? But a friend gave him a free ticket and so he went. Upon going, he and many visitors experienced, and walked away with, something they did not expect to find.

Upon entering, visitors descend the stairs into a dimly lit corridor, filled with the sound of voices recalling memories from Sept. 11, 2001.

The museum’s core exhibitions are located seven stories below ground, in the very space that once served as the foundation for the Twin Towers. The museum occupies 110,000 square feet on the 16-acre trade center site. It currently holds 100,000 artifacts varying from photographs, videotapes, and oral histories to recovered property—and it is still actively collecting.

Benches were scattered throughout the museum for people to sit and reflect, or simply take a break after an intense moment.

Herbst experienced a mixture of emotions. The atmosphere was hauntingly respectful. Almost no one chatted. He sat down several times and allowed himself to get lost in his thoughts, as he tried to process the magnitude of the museum and all the information that it showcased.

“I’ve been following 9/11 for years, I’ve watched all the documentaries,” he said. “But I was still amazed at some of the little things I saw that I didn’t know about.”

Mundane items such as MetroCards, keys, and building passes suddenly took on emblematic depth when featured on display. The items serve as touchstones for powerful, sad, and surprisingly inspirational stories.

There were countless stories of people carrying strangers down burning stairways, only to leap back into the peril to rescue more.

“For the flight that crashed in Shanksville, there was a whole section devoted to flight attendants calling family members, and people on the plane storming the cockpit, fighting back,” Herbst said. “These people just went to work one day, or decided to get on a flight one day, and 12 years later they’re in a museum and will be there forever.”

He noted that overall the museum was a good experience, but there were some parts he preferred to avoid.

“There’s a full section about al-Qaeda, which I understand is a part of the story,” he said. “But I had no interest in learning about al-Qaeda.”

“And I felt the gift shop was offensive and tacky,” he said. “I can’t imagine buying a gift for someone on the site of mass murder. It’s like walking through a concentration camp and then bringing home a T-shirt.”

The plaza and museum cost $700 million to construct, with the help of a subsidy that consisted of $390 million in tax-funded grants. The $24 entrance fee and gift shop products are expected to generate $40 million a year, which will cover most of the $60 million it will cost to run the museum annually.

“But people have been selling 9/11 things around the street for the past nine years unofficially,” Herbst said. “My feeling is if these items are going to be sold at least the gift shop can ensure that the money is going back to the museum, I agree with it on that respect.”

Herbst doesn’t need a souvenir to remember that day.

After leaving the museum, Herbst returned to his work selling real estate. But he couldn’t focus.

“I kept thinking I could have spent all day there,” he said. “I went to 70 percent of it, but when I turned on the news I saw there were still many parts I didn’t see.”

“I think I will wait a while, but I definitely want to go back,” he said. “Today I was more curious about what they have done, but now that I’ve seen it I would like to go back and explore it a little bit deeper.”

For Herbst, the museum had a special way of showing how one of the most tragic moments in American history can somehow serve as a symbol of humanity.

“I was emotionally drained when I left, but I think I walked away with a better understanding of the human condition,” he said. “They really did a good job representing the actual humanity of the situation.”