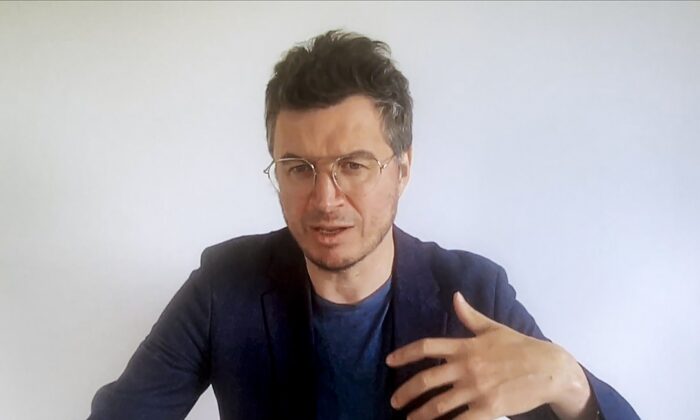 Mattias Desmet, professor of clinical psychology and author of “The Psychology of Totalitarianism” in June 2022. (American Thought Leaders/Screen shot via The Epoch Times)
US Features

When many people feel disconnected from their social environment they become prone to fanatical belief in an unreasonable narrative, creating favorable conditions for the emergence of a totalitarian state, said Mattias Desmet, a professor of clinical psychology.

The psychological phenomenon where individuals who feel disconnected from their natural and social environment and experience purposelessness in life start to fanatically believe in a certain narrative—even if it is absurd—is a specific kind of group formation called mass formation, Desmet told EpochTV’s “American Thought Leaders” program on June 16.

The individuals in the grip of the mass formation are blind to the absurdity of the group narrative to the point “that they become radically intolerant for dissident voices, and that in the end, they also stigmatize and ultimately try to destroy the people who do not go along with the narrative,” Desmet explained.

They are willing to sacrifice everything that used to be important for them for the narrative they believe in, said Desmet, one of the world’s leading experts on the mass formation phenomenon and author of “The Psychology of Totalitarianism.”

For example, there was an incident during the Iranian revolution in 1979 in which an Iranian mother reported her son to the government for not being loyal enough to the state and helped to execute him, the professor said.

“It is exactly this kind of mass formation that leads to the emergence of totalitarian states.”

A totalitarian state is always based on a segment of the society–usually 20 to 30 percent of the population–which becomes fanatically convinced of a certain narrative and of a certain ideology, for instance, the racist ideology of Nazi Germany or the Marxist ideology in the Soviet Union, Desmet explained. This fanatical part of the society, together with a few leaders, succeeds in taking control over the state thus creating a totalitarian state, he said.

Both classical dictatorships and totalitarian states control the public space and the political space, but the totalitarian state also controls the private life through its huge “secret police” comprised of the part of the population fanatically believing in the state narrative, the professor said.

A classical dictatorship differs from a totalitarian state as it involves only a small elite group–a dictatorial regime–that incites fear in the population through its aggressive potential to the point that the populace accepts a social contract unilaterally imposed by the regime, Desmet said.

“In a classical dictatorship, the point of gravity of the system is in the dictatorial regime. If you succeed in eliminating a part of the regime … usually the dictatorial system will collapse.”

In a totalitarian system, the point of gravity is not much in the elite but it is situated in the masses themselves, so if a part of the totalitarian elite is destroyed the system just continues as if nothing happened, Desmet said. “That’s why Stalin, for instance, realized that he could perfectly eliminate 60 percent of his own communist party, and the system will not collapse. The people who were eliminated were just replaced.”

A totalitarian state emerged for the first time at the beginning of the 20th century because of the phenomenon of mass formation, which exists as long as mankind exists, but it became increasingly strong at that time, Desmet explained.

“The root cause [of] mass formation is that many people in society have to feel disconnected from their natural and social environment,” Desmet said.

“The number of lonely people increased throughout the last two or three centuries as a consequence of the rise of the mechanistic view of man in the world, the industrialization of the world, and the use of technology.

“Once people are in this disconnected state, they will typically start to experience purposelessness of or lack of meaning-making in life” which is the second step leading to mass formation, the professor said.

The third step is when people develop so-called free-floating anxiety, frustration, and aggression without knowing what they feel anxious, frustrated, and aggressive about, Desmet said.

“This is a highly aversive mental state because it makes people feel as if they are out of control,” They cannot control their anxiety and do not know what they should protect themselves from, he added.

If under these conditions, a narrative is distributed through the mass media indicating an object of anxiety and providing a strategy to deal with this object of anxiety then there might be a huge willingness to participate in the strategy and direct the aggression and frustration at that object, Desmet said.

“That’s the first step of every major kind of mass formation, whether we are talking about the Crusades, … or the French Revolution, or communism in the Soviet Union, or the rise of Nazism in Nazi Germany.”

The second step and the most important thing is when people start to participate in the strategy to deal with the object of anxiety they start to feel connected again, but this new social bond is not formed between individuals connecting to other individuals; it is a bond formed as a separate connection between each individual and the collective, Desmet explained.

Thus a new group is formed but its solidarity is not “this typical solidarity that exists in a mass or in a crowd is not a solidarity between individuals. It’s a solidarity of every individual separately to the collective,” he said.

The mass formation is exactly the same as hypnosis which is another reason why people continue to buy into the narrative even if it is inaccurate, unscientific, or completely absurd, Desmet said.

Hypnosis occurs when someone can withdraw their attention from reality and focus all their attention and psychological energy on one small aspect of reality, Desmet explained. When one is under hypnosis even strong physical pain, as during surgery, is not felt anymore, he added.

“[This is] how strong this mechanism of the focusing of attention is, as it exists in hypnosis, also in illusionism, and also in mass formation.”

Mass formation not only leads to the exclusion from public space and destruction of a large part of society that is not willing to conform to the group ideology but eventually it leads to the self-destruction of the masses itself, Desmet said.

Just before the COVID-19 pandemic, the number of people who felt lonely or disconnected from their natural and social environment was huge and it had never been so high before, Desmet said.

“Worldwide 30 percent of the of the population claimed to have no meaningful relationships at all, and to only connect to other people through the internet.”

Before the pandemic, over 60 percent of the people worldwide considered their job as not having any meaning at all and only 15 percent reported that their job was meaningful, Desmet said.

“I noticed how all negative psychological parameters such as stress and depression, anxiety, burnouts, and so on, have they all started to increase exponentially. … I had the feeling already that society was ready for a large scale mass formation.”

Mass formation explains why during the COVID-19 pandemic people accepted drastic COVID-19 restrictions preventing people from helping someone in an accident without wearing a mask and gloves or visiting a dying elderly parent, he said.

Desmet said that in his view the data presented by the mainstream media was dramatically overemphasizing the dangers of the virus while at the same time underestimating the dangerousness of the measures that were taken in response to the pandemic.

Normally, a cost-benefit analysis of pandemic measures should have been performed before implementing them, but nobody seemed to be interested in such analysis despite warnings from some scientists and some institutions, Desmet said.

The solution to a totalitarian state that emerged through mass formation is not through destroying the elite, as some may think, because as long as the society is in the grip of the mass formation “it will recreate the same elite time and time again,” Desmet said.

The problem can only be solved if a sufficient number of people, who become aware of the mass formation, do not go along with the mainstream narrative, Desmet said.

“That’s the only true solution and in that case, if we can start with thinking a different way, we will see that a new elite is formed and that the elite that exists now will cease to exist in a spontaneous way.”

We should focus on trying to live up to the principles of humanity, trying to rediscover them, trying to speak out “in a world that is increasingly becoming inhumane,” Desmet said.

“The dividing line between good and evil runs through every heart,” Desmet said paraphrasing Aleksandr Solzhenitsyn, a Soviet dissident and Nobel laureate.

“People need to reconnect with their environment and that means we have to move on to a society with much more local production of all kinds of the things we need to survive. … We have to cultivate, and promote truthful speech in society.”

All these conditions that create social isolation, lack of meaning in life, free-floating anxiety, frustration, and aggression should be avoided, the professor said.

Desmet also cautioned against using violence to resist a totalitarian system because every use of violence will be used by the masses to justify the destruction of the people who go against the dominant narrative.

“Resistance from within a totalitarian system can only be successful, if it sticks to the principles of nonviolent resistance,”

Desmet recommends studying the way in which Mahatma Gandhi proceeded in India’s struggle for independence. Gandhi is known for his nonviolent philosophy of passive resistance.