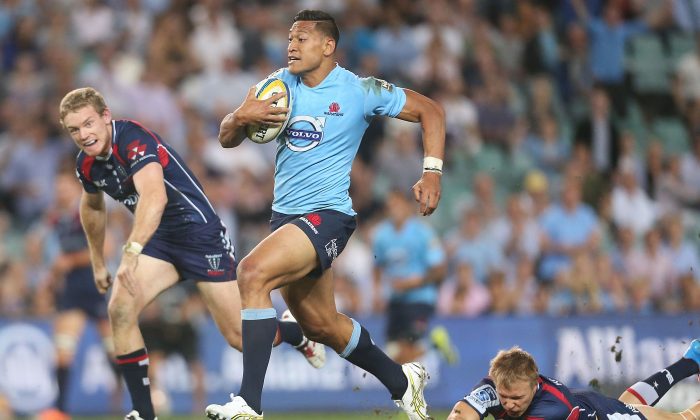 Waratahs full-back Israel Folau breaks the Rebels defence on Saturday March 22, 2014. The Waratahs will miss Folau due to injury in their match against the Sharks on Saturday March 29, 2014 in Durban, South Africa. (Mark Metcalfe/Getty Images)
International

Loss-Hardened Sharks Will Be Too Strong For Waratahs

The Waratahs face the table-topping Sharks in Durban on Saturday (March 29), with both sides needing to win.

Last weekend the Sharks were beaten 23-19 by the Bulls at their Pretoria fortress, Loftus Versfeld.

As expected, this clash of champions was close, combative and competitive. The Sharks could hold their heads high in defeat—but a proud loss is still a loss.

A second loss to the Waratahs would be a disaster. And a personal one for Sharks coach Jake White.

White opted out of an Australian contract with the Brumbies to return to coach the Sharks this year. The move reunites White with Sharks boss John Smit, who was captain of the Springboks when they won a World Cup with White as coach.

The Brumbies approved White’s early retirement and installed local hero Steve Larkham, who had been an assistant to White.

Larkham’s Brumbies dominated the Waratahs at home two weeks ago, by outplaying and out-thinking the Sydney side.

It was a humiliating defeat. Last weekend the Waratahs beat the lacklustre Melbourne Rebels 32-8, as expected.

The Sharks are nothing like the Rebels though. They play with the attitude and the ability of an international side.

Add World Cup-winning White to that mix and you have table-topping potential—potential that has been realised.

The ultra-competitive White impressed Australian fans during his time with the Brumbies. White focussed a lot on loyalty, transforming the ill-disciplined side into disciplined winners.

He was touted as the national coach, but lost selection to former Wallaby Ewen McKenzie.

Suddenly his loyalty to the Brumbies disappeared and White returned to South Africa.

The departure was amicable, with the Brumbies supporting White’s early departure, partly because of his huge contribution to Brumbies rugby.

White knows many Australians aren’t as magnanimous as the Brumbies, so the least he can do is prove he is a good coach.

He wondered how he would fit into the White regime: “It wasn’t easy for me, just to come in and play because there was a new coaching staff …”

However, Pietersen quickly became a believer in White. He said the Sharks always believed they would win the competition.

“We’ve said that every year,” he said, “we’ve come close but never won it.”

Pietersen said that it was different when White said they would win this year.

“It’s probably the same mind-set,” he said, “but the belief is the difference. It’s probably 100 per cent better than it’s ever been.”

White’s Sharks are battle-hardened after their gruelling loss to the Bulls, so they will literally hit the Waratahs with everything they have.

The Sharks have lost star fly-half Patrick Lambie, who is out for the season through injury.

The Waratahs have lost star fullback Israel Falou with a bruised throat—the league star who came to rugby after an unsuccessful stint playing Australian football has been all-but untouchable this year.

Coach Cheika was pragmatic saying they had “to be able to play without him”.

Another concern for Cheika will be star back Kurtley Beale. Beale went to South Africa last year with the Rebels. He was sent home after allegedly hitting team-mates, including his captain.

A series of incidents followed, which led to counselling, then the sack.

The expert eye of White will have noted weaknesses, which will be exploited by his inspired charges. The crowd, too, will quickly exploit player frailty, while cheering every Shark attack and tackle.

If the Waratahs win, it will be a great win. If they loose, they could loose heart and loose by a lot.