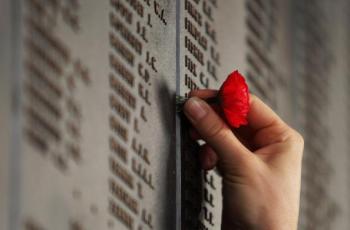 A woman places a poppy on the Roll of Honour for World War I after an ANZAC Day Dawn Service at the Australian War Memorial in Canberra. Around some 60,000 Australians were killed during World War I and just over 27,000 would die in the war that followed. (Mark Nolan/Getty Images)
US

Losing Family Because of War

There’s not much in the village of Krambach in northern NSW. There’s a pub, a convenience store and whatever else is needed to service the locals and any farmers in the surrounding area.

In the small park beside the pub is a war memorial dedicated to 46 local men who served in World War I, 1914-1918. Among the names etched into the black stone are 13 who bear the Irish surname Gallagher.

I wondered how the Gallagher clan made sense of their loss in the years of peace that followed.

At the time of World War I, Australia had a population of less than five million; from that number, 416,809 men enlisted to serve and of that number, some 60,000 were killed. Over 150,000 were wounded or taken prisoner.

All the towns we passed through on our way to the coast had similar war memorials; a bigger town usually meant more names. Most memorials remembered the major wars that Australia was involved in –World War II, the Korean conflict and Vietnam.

As we left Krambach and its small park, I asked my 70-year-old father what type of farming they would have done in the area around the time of World War I and he thought it would have been dairying.

I later asked my father if we had relatives who served in World War I and he couldn’t recall any. The loss from war in our family history mainly involved Hitler’s invasion of Poland and later, when the Japanese decided to claim Asia as its own.

My grandfather’s younger brother Jack was among the first in his town to enlist and he was the only one from the family who did not return. Jack fought in North Africa, Greece and then Crete, where he was one of 3109 Australian soldiers taken prisoner by German paratroopers.

On occasion, from various prisoner of war camps, Jack managed to send letters to his family back in north-west NSW, but as the end of hostilities in Europe approached, the postcards ceased. The last thing the family heard of Jack was from an Australian newspaper where he was quoted as saying from an Allied hospital bed that he was looking forward to coming home.

The family was overjoyed at the news, but that is where it ended – no real reports followed and Jack was not among the ranks of those returning. What followed was hearsay that so-and-so said Jack was now living in England. The family sent letters and made telephone calls to his former comrades, but there was no news of Jack’s whereabouts.

Somehow, my grandmother managed to contact the newspaper journalist who wrote the article that quoted Jack. The journalist told her it was doubtful that Jack would have been able to survive the dysentery that had sucked the life from him.

Eventually, the family discovered that Jack had died in Germany only a few weeks before the war in Europe ended.

In 1967, my father visited Jack’s grave in rural Bavaria and my brother and I did the same in 1992. We found the well-tended Commonwealth War Cemetery where Jack and hundreds of others lay.

Snow capped mountains are not far off and the land is surrounded by a fine line of tall pine trees. Beyond the trees lay Bavarian farms.

Most of the farming in the area seemed to be dairying, just like it once was around the NSW village of Krambach.