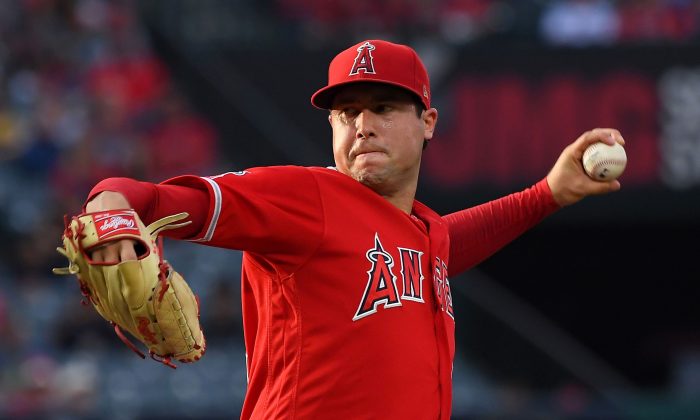 Tyler Skaggs #45 of the Los Angeles Angels pitches in the first inning of the game against the Oakland Athletics at Angel Stadium of Anaheim in Anaheim, Calif. on June 29, 2019. (Jayne Kamin-Oncea/Getty Images)
Baseball

He last played on June 28 against the Oakland A’s.

Angels statement on the passing of Tyler Skaggs. pic.twitter.com/6XA2Vu1uWV

“It is with great sorrow that we report Tyler Skaggs passed away earlier today in Texas,” the team wrote. “Tyler has, and always will be, an important part of the Angels Family.”

“Our thoughts and prayers are with his wife Carli and his entire family during this devastating time,” the team also wrote.

The details surrounding his death are not clear.

MLB commissioner Rob Manfred has released a statement about the matter, saying, “I am deeply saddened by today’s tragedy in Texas. All of us at Major League Baseball extend our deepest condolences to Tyler’s wife Carli, their family, their friends and all of his Angels’ teammates and colleagues,” the Los Angeles Times reported.

He added: “We will support the Angels’ organization through this most difficult period, and we will make a variety of resources available to Tyler’s teammates and other members of the baseball family.”