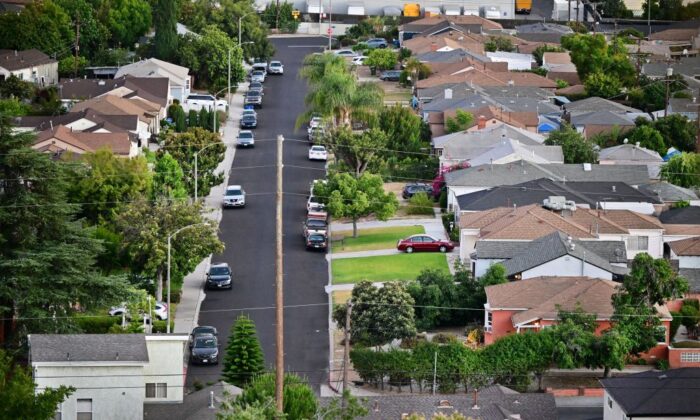 A view of houses in a neighborhood in Los Angeles, Calif., on July 5, 2022. (Frederic J. Brown/AFP via Getty Images)
Southern California

LOS ANGELES—In an effort to create more affordable housing in wealthier, so-called higher resource neighborhoods, the Los Angeles City Council has called for the preparation of an ordinance that would incentivize affordable housing projects in such areas.

Only 14 percent of the affordable housing units permitted in Los Angeles during the past decade were located within high-resource neighborhoods, while 86 percent were in neighborhoods deemed low-resource and high-poverty.

“I want to make sure that balance looks a little better for Los Angeles going forward,” said Councilwoman Nithya Raman, who introduced the initial motion in August 2021 along with Councilman Marqueece Harris-Dawson.

The council voted 12–0 Aug. 26 to direct the Department of City Planning to prepare an ordinance that would expand incentives for projects located on land already zoned for multi-family housing, with a focus on commercial zones, transit areas, and corridors.

The incentives could include “ministerial approval” for such projects, meaning the permitting process would be streamlined and the project was given approval as long as it meets certain objective standards.

The council also instructed the department to report back on recommendations for a local incentive program to increase the number of affordable housing units for projects in higher-resource neighborhoods.

Councilman Mike Bonin, who said affordable housing is difficult to build in his Westside district, urged planning officials to “come back with something that is as strong as possible that makes it mandatory to do it.”

The council called for options to create an “Affordable Housing Overlay Zone” that Raman said would ensure affordable housing projects in higher resource areas are economically feasible for developers, as it costs more to build housing in wealthier neighborhoods.

The zoning would allow more affordable housing to be built near public parks, transit schools, grocery stores, and health facilities.

According to UC Berkeley’s Other & Belonging Institute, Los Angeles was the sixth-most segregated metro region with a population of more than 200,000 as of 2019.

“Any way we can enhance a policy which encourages affordable [housing] and incentives it across city equitably is a good thing,” Councilman Mitch O’Farrell said. “Not any one, two, three, or four council districts should shoulder the entire burden of the production of affordable housing. It should be citywide. That’s more fair and equitable.”