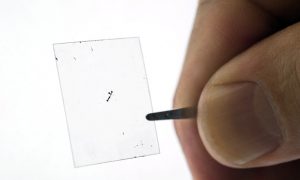 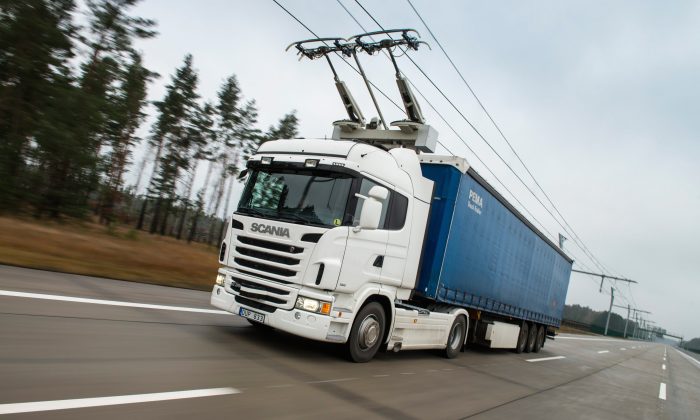 LOS ANGELES—A local air pollution control agency will test a one-mile stretch of an electric highway or “eHighway” starting next summer. It will be built in the city of Carson near one of the largest sources of air pollution in the area—the ports of Los Angeles and Long Beach.

It’s designed to allow commercial trucks that typically run on diesel to instead use power from overhead electrically charged wires, or a catenary system, similar to light rail or trollies. The wires would be installed over two lanes, allowing the trucks using them to produce zero on-site emissions while using them.

More than 40 percent of goods shipped to the U.S. come through the ports of Long Beach and Los Angeles. Trucks like the ones that ferry goods between the ports and the railroad transshipment centers are the number one source of a group of pollutants called nitrogen oxides in Southern California.

According to California’s Office of Environmental Health Hazard Assessment (OEHHA), nitrogen oxides can damage lung tissue, lower the body’s resistance to respiratory infection, and worsen chronic lung conditions, like asthma. They also react with other pollutants in the atmosphere to form ozone, a major component of smog.

Diesel exhaust also contains many other substances that can lead to cancer. OEHHA found that long-term exposure to diesel exhaust particles carried the highest cancer risk of any air pollutant.

“The highest cancer risk to residents occurs in areas near the ports of Los Angeles and Long Beach, as well as along freeway and other busy transportation corridors,” said Sam Atwood, media relations manager at SCAQMD. “Diesel exhaust is a very potent carcinogen, and most trucks are still powered by diesel.”

OEHHA estimated that about 70 percent of the cancer risk for Californians from breathing toxic air pollutants stems from diesel exhaust particles.

“In order for us to achieve clean air here in Southern California, we are going to need very significant additional reductions in air pollution, and much of this will have to come from this goods movement sector,” said Atwood.

As part of the “Zero Emission I-710 Project” SCAQMD will be demonstrating three other kinds of trucks in addition to the e-highway truck system—one battery electric truck, one natural gas hybrid truck, and one diesel hybrid truck. The agency hopes the trucks connecting to the catenary system in the future will all be hybrid or electric.

Right now, Siemens is doing a small test strip, but supporters hope the e-highway will eventually be extended from the ports all the way to local rail centers further inland.

“I’m happy to see the Los Angeles region leading the way in bringing cutting-edge technology to an increasingly important economic center,” said Los Angeles Councilman Joe Buscaino in a press release. “The e-highway project is a great example of how electricity can help power the next generation of transportation systems while also providing cleaner air for our citizens in the process.”

When this project reaches completion, it will be the first such pilot in the U.S.

Siemens, is now constructing the equipment for the eHighway. On-the-ground construction is expected to begin in early 2015, and is supposed to be up and running by July, after which SCAQMD will conduct a 12-month test to see how well it works.