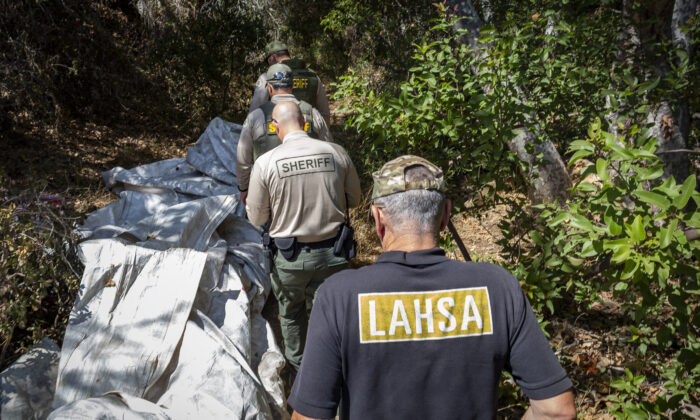 LOS ANGELES—The City of Los Angeles began removing an encampment on March 17 from a Little Tokyo plaza before closing and fencing it off to the public—drawing protests from local homeless advocacy groups, but also an impassioned defense from City Councilman Kevin de León.

De León, who represents the plaza area, said Toriumi Plaza, located at First and Judge John Aiso streets, is being closed for maintenance, electrical repairs, landscaping, permanent fencing, and other ancillary work. A timeline for when the plaza will reopen was not available.

Since Feb. 16, the Los Angeles Homeless Services Authority (LAHSA) has conducted outreach and brought 86 homeless people from the plaza into shelters, including 25 on March 17. About seven remained in the plaza as of the afternoon of March 17, according to de León’s office. Four of them are being evaluated by the Los Angeles County Department of Mental Health.

As of March 16, LAHSA had provided 185 people in the area with referrals for substance abuse programs, housing and shelter options, mental health services, survival resources, and coronavirus-related services, according to de León’s office.

The people brought indoors have been placed in several facilities, including A Bridge Home temporary shelter, the Hilda L. Solis Care First Village interim housing, and permanent placements within the Project Roomkey program at the Cecil Hotel, which is now operated by the Skid Row Housing Trust, according to de León’s office.

J-Town, along with We The Unhoused and Ktown for All, protested with dozens of people on March 13, and a smaller protest was held on March 17 in opposition to the city’s removal of the unhoused residents, as well as to the shelter options that it has offered. Protesters allege the Project Roomkey program, which provides hotel rooms to unhoused people, includes “prison-like conditions and restrictive policies.”

Some Project Roomkey residents, including a group that organized last year under the name Unhoused Tenants Against Carceral Housing, have alleged that they are subjected to debilitating curfews that restrict their employment options, as well as to supply confiscations, harassment from security, a lack of privacy and other rules as a condition of the placement.

A woman who asked to be identified under the pseudonym Amy told City News Service she has lived on the sidewalk outside the plaza for the last three years, arriving before the plaza became home to dozens of people during the COVID-19 pandemic. She said she believes the city is not offering adequate solutions for the plaza’s residents, which she said is largely a community “captured by the crystal meth addiction.”

“They need drug treatment, or mental health or alcohol [treatment] or combinations … that’s an investment which this does not make. It only puts you in a hotel, even a nice hotel, but that becomes a prison because then you have to deal with the medical staff coming and going, you can’t leave before a certain time, you have to be back at a certain time, they serve meals at a certain time, the security of the hotel, the personnel of the hotel, the medical staff that checks you coming and going … and many of these people look down on you. You’re ‘the homeless,”‘ Amy said.

“Sending in lethally armed police to tear down tents and destroy people’s belongings does not make housing any more accessible, and the ‘housing’ he [de León] does offer is temporary and akin to prisons,” Gianna Furumoto, an organizer with J-Town Action and Solidarity, told City News Service on March 15.

“We know many residents at Toriumi Plaza who accepted Project Roomkey and are already back at the plaza—not by choice, but because they were kicked out of [Project Roomkey] to make room for newly swept people.”

The temporary fence erected around the plaza on March 17 was lined with signs that said “KDL [Kevin de León] hates the poor” and “Housekeys not handcuffs.”

Regarding the animosity directed at de León and his office, the councilman told City News Service on March 17:

“We want to provide housing and get folks off the street and get them into an environment that’s safe for them. And to date, we’ve been extremely successful, with a vast majority—I would say 9 out of 10 unhoused neighbors—readily accept housing. These so-called activists seem to have a different political agenda where they want our unhoused neighbors to continue to live on the streets, confusing them, for those who are severely mentally ill, and with the bull horns, screaming, shouting and confusing them. That is not humane. It’s not progressive to let people live or die on the streets.”

De León added that, despite protesters claiming that his office is criminalizing homelessness, “nothing has happened like that at all, whatsoever, not one single instance. … They’re perpetuating a narrative that is deadly for our unhoused neighbors.

“…I’ve never encountered anything like this in my life. In which universe is it better to live on a cold cement with no bathrooms, no running water, no heat than a hotel room with your own shower, with your own toilet, with your own mirror, with air conditioning and heating and more importantly, your own locked door, so you can lock it for your own safety?” de León added. “It’s just mind-boggling. It’s confounding. They have co-opted their misery.”

According to de León’s office, community members and nearby businesses have complained about the encampment’s presence in the plaza, and there have been multiple overdoses, at least one sexual assault, drug deals, vandalism, assaults, and fires at the location reported to the police department.

Candy Kisswani, who owns Mike’s Deli across the street from the plaza, told City News Service the business “has taken a big hit” since the encampment developed across the street and that she has been complaining to the councilman’s office for the last two years.

“It has got to get cleaned up. It’s really not safe,” Kisswani said.

Dora Hanamure, who works at and is married to the owner of Mitsuru Sushi & Grill, told City News Service on March 16 that they haven’t experienced many problems with the neighboring encampment, but that customers have complained about not feeling safe in Little Tokyo.

Furumoto said J-Town Action and Solidarity (JAS) has communicated with nearby businesses about their concerns.

“Our position at JAS is, if you don’t want to see these people doing drugs, the only thing is to provide permanent housing for them. People who are housed also do drugs, they just have the privilege of doing it in their own space,” Furumoto said. “What we need to provide is services to the unhoused community rather than bringing them more violence and displacement, which really just aggravates everything that these business owners are complaining about.”