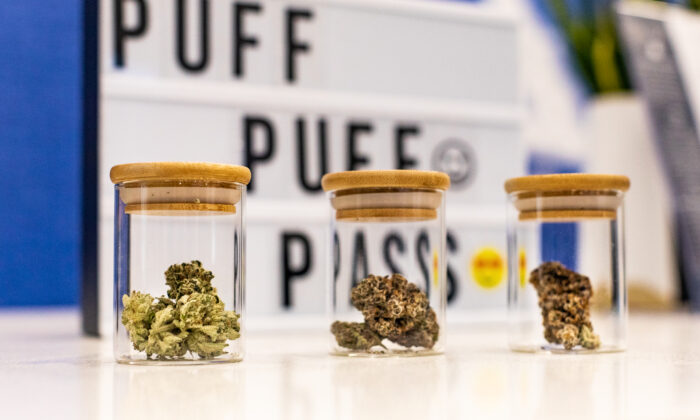 Vials of marijuana for sale at a dispensary in Santa Ana, Calif., on Feb. 18, 2021. (John Fredricks/The Epoch Times)
Southern California

LOS ANGELES—Los Angeles County and city officials revised regulations in its retail cannabis framework this week making it easier for employers to obtain permits in unincorporated areas and revising its existing “social equity” policy to expedite the process for low-income applicants.

The LA County Board of Supervisors passed a motion on Feb. 15 to implement an “equitable commercial cannabis regulatory framework” that would allow the cannabis market to expand into unincorporated areas of the county.

The action means the county may soon suspend its historic ban on commercial cannabis and dispensaries. Retail cannabis has been illegal in the county since 2010; but in 2017, officials expanded the policy to include restricting the cultivation, manufacturing, and distribution of recreational marijuana.

Brought forth by Supervisor Hilda Solis and Chair Holly J. Mitchell, the motion says that despite statewide legalization of cannabis passed in 2016 by voters, LA County prohibits the commercial sale of cannabis retail. As a result, more than 150 illegal cannabis “pop-ups operate haphazardly” within the unincorporated county currently.

“The number of unregulated and illegal cannabis pop-ups operating within the unincorporated areas has steadily increased over the past years, putting consumers at risk by potentially providing tainted and unregulated products and creating an environment of organized crime to infiltrate and thrive—enforcement members alone isn’t enough,” Solis said during a Feb. 15 meeting.

The motion was supported by the United Cannabis Business Association—one of the leading associations representing cannabis retailers—along with LA-based retail group Shryne Inc.

Proponents of the policy changes say this is necessary to restore social equity among minority groups who have been incarcerated for marijuana possession and sales prior to its legalization.

“Low-income communities continue to experience harm most acutely without experiencing any of the promised new economic or improved wellbeing opportunities,” Mitchell said on Feb. 15.

The Department of Consumer and Business Government Affairs was directed by the board to orchestrate the new program while prioritizing “equity” applicants. The initiative will allow up to 25 retail, 10 cultivation, 25 delivery, 10 distribution, 10 manufacturing, and 10 testing licenses.

Meanwhile, at the city level, the LA city council adopted a motion on Feb. 16 with similar changes to the Department of Cannabis Regulations to make it easier for citywide employers to obtain a license. The city recently received a $2 million grant from the state government to further streamline cannabis licensing.

“Social Equity Applicants” have complained about the Department of Cannabis Regulation’s “extended” and “inexcusable” delays regarding the application process to manufacture and sell cannabis, according to the motion.

The move comes as officials have sounded the alarm on illegal cannabis operations throughout unincorporated areas in the county over the last few years, with some causing danger to nearby neighborhoods. Law enforcement officials took down 205 illegal marijuana farms in the Antelope Valley run by cartels last July and seized $1.2 billion worth of marijuana. Cartels were found stealing water from residents in the area to support their illegal operations, too.

In a press conference unveiling his 2022 budget plan earlier this year, Gov. Gavin Newsom said he would overhaul the current taxation framework for cannabis retailers and give them tax breaks.