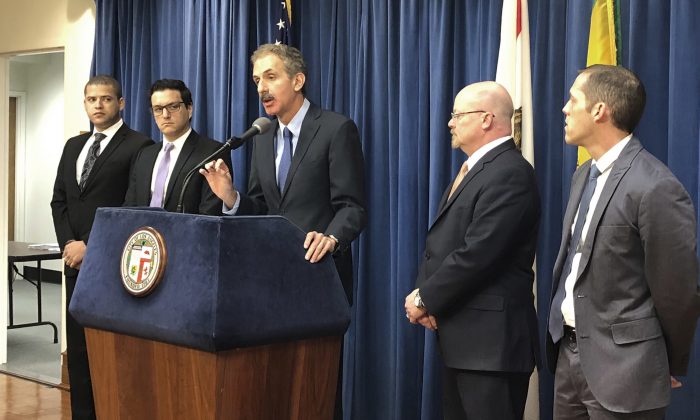 LOS ANGELES—Los Angeles city filed a nuisance abatement lawsuit against the owner and a tenant of a 16-unit apartment building in South Los Angeles that they allege is a hotbed of gang activity and a magnet for violent crime, City Attorney Mike Feuer announced Dec. 22.

The building, at 501 E. 23rd St., has had five documented shootings and four gun possession arrests since January, according to Feuer. The location is within 500 feet of Santee High School and the Trinity Recreation Center.

Javanshir Rad, principal of First Rain, the corporation that owns the building, declined to comment on the lawsuit.

“No family should be subjected to the ongoing violence that has plagued this community. We allege this property, so close to a public school and city recreation center, has been an epicenter of gun violence and brazen gang activity. We aim to put a stop to it,” Feuer said. “With Angelenos on edge over escalating violence, aggressive actions like this lawsuit can play a key role in restoring public safety.”

Feuer said the presence of Primera Flats gang members has made the building a target for rival gangs.

The lawsuit seeks an injunction to require that First Rain implement physical and managerial improvements to reduce gang activity and crime, such as an electronic gate, an internet-connected video monitoring system, enhanced lighting, a property management company and on-site manager, the use of written leases and adoption of house rules, improved tenant screenings, the hiring of licensed security guards, and the eviction of a tenant that the city alleges is a member of the Primera Flats gang.

The lawsuit alleges that Clemente Huerta-Cruz, who is currently incarcerated, lives in one of the apartments and prior to his incarceration had been arrested at and around the property three times since April for gun-related offenses. The city also alleges that his apartment unit is used by gang members.

The city intervened in May 2018 and advised First Rain to implement crime-fighting measures, including video cameras, lighting, and no-trespassing signs. Crime on the property declined for the first two years after the meeting, but the city alleges that First Rain did not implement all the suggested improvements or maintain the ones that were added, causing violence to return earlier this year.

This nuisance abatement lawsuit is one of 162 filed by Feuer’s office since July 2013. Residents who want to report “problem properties” may call the City Attorney’s Office anonymously at 213-978-8340.