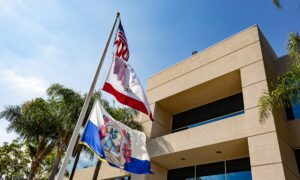 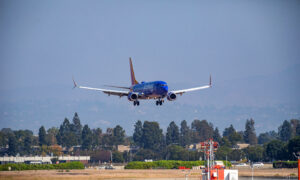 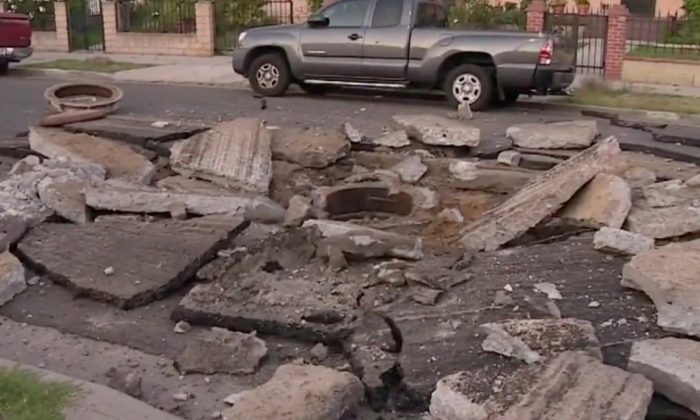 “I heard this big old explosion like consecutively four times in a row, and I was like ‘Whoa, what was that?'” said local resident Adrian Jefferson to CBS. He and his brother were shaken by the explosions.

“Electrical vaults from time to time will overheat and explode just because they get so hot,” Los Angeles Fire Department Battalion Chief Kris Larson explained. “There’s energy running through them and there’s heat behind it. It’s just unusual that it happened on a day that’s not extremely hot.”

It is believed that the blast was due to a nitrogen leak in the lines that carry electrical wires underground. At some point the nitrogen leaked into the electrical wiring and created the explosion, according to NBC4. Fortunately, nobody was injured.

Car windshields and exteriors were damaged by flying asphalt and concrete that flew up from 7 inches deep into the ground.

The ripped up street was repaired and reopened for traffic Thursday morning. The electrical circuits below street level carry enough energy to power over 1,000 homes.

Residents could be seen taking photos in the blast’s aftermath, as smoke billowed up from the open ground. In an amateur video, locals said that the area near the explosion was hot.

“It just felt like the floor shook. It was like a mini earthquake,” said Heidi Jimenez to KTLA 5.

It is not known whether the explosion was caused by the underground equipment of the Los Angeles Department of Water and Power or SoCal Gas, two local utility companies.

A similar electric vault explosion occurred in the Beverly Grove section of Los Angeles on July 4, CBS reported. Four people suffered minor injuries from flying debris. The resulting electrical outage affected hundreds of utility clients for over 12 hours, including a hospital, which was forced to use backup generators. Los Angeles also had a power outage on July 3 that left 3,450 customers without power. That outage was due to a cable on the same circuit that exploded.