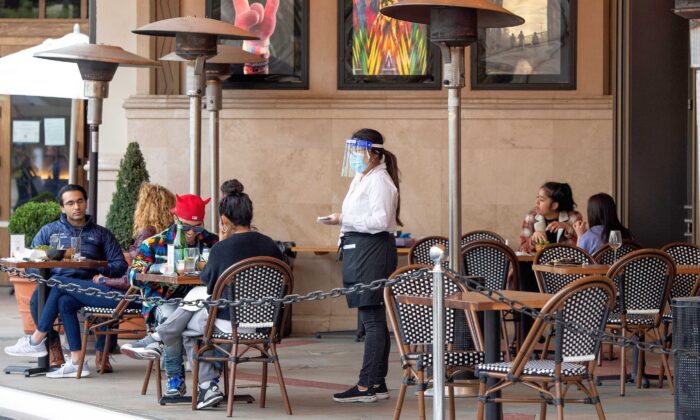 A waitress takes customers' orders in the outdoor seating area of a restaurant in Los Angeles, Calif., on Jan. 28, 2021. (Valerie Macon/AFP via Getty Images)
Southern California

LOS ANGELES, Calif.—Restaurants in Los Angeles will now be able to obtain a permit to sell alcohol faster under a new program the city created to help restaurants rebound from the COVID-19 pandemic.

The city council on Feb. 9 approved the program, which has been in the works since 2020, lessening the cost and time it takes for employers to serve alcohol in their restaurants.

“We all know that the restaurant industry has hit on very hard times, particularly post-pandemic,” Councilman Paul Krekorian said during the meeting. “So, we’ve been working on a way to try to shorten the time that restaurants need to get open and to get open and provide a full range of services to their customers.”

The initiative, called the Restaurant Beverage Program, received support from California Restaurant Association’s LA chapter and local business owners who complained the process of obtaining an alcohol license issued by the City of Los Angeles is too costly and often takes several months to a year.

This program will bring that time down from months to weeks and costs down from $13,000 to $4,000, according to the California Restaurant Association’s LA chapter.

“[The program will] expedite the recovery of existing restaurants and potentially expedite the opening of new restaurants that were in the process of opening before the pandemic,” the restaurant association wrote in a letter to the council.

However, each city councilmember must submit a resolution in order to opt their districts into the program. Krekorian said this method “provides us with an opportunity to ensure that if particular neighborhoods are not interested in this program, they will not participate.”

It requires the establishment to have an operational kitchen where food is prepared onsite with a full menu. They also must operate between the hours of 7:00 a.m. and 11:00 p.m.

To qualify for the program, restaurants must already have an alcohol license issued by the California Department of Alcoholic Beverage Control.

Councilwoman Monica Rodriguez said the program is “the gateway” to more conversations on reforming other processes in various industries in the city.

Some residents called into the meeting to oppose the program, claiming it will only bring more substance abuse issues to sensitive areas like Skid Row.

Charles Porter of the Skid-Row-based United Coalition East Prevention group said their organization has “strong concerns” about expediting the sales of alcohol in LA restaurants.

“We’re still concerned about a process to fast-track alcohol sales and at the time of rampant alcohol and substance abuse,” Porter said during public comment, adding that Senate Bill 389 “changes the spirit and scope of this program” by allowing restaurants to serve cocktails for carryout and delivery orders for the next five years.

LA restaurants were among the heaviest hit industries that suffered tremendous loss under the city’s stringent COVID-19 restrictions that began in March 2020. In a 2021 legislative committee report, a third of the state’s restaurants closed permanently. Hundreds shut down in Los Angeles.

“[The program] will help neighborhood serving restaurants recover by removing unnecessary hurdles that disproportionately impact independent business owners,” Kayla Koerting of the Valley Industry Commerce Association said. “Other cities have implemented similar programs without negative effects on their communities—it’s time for the City of Los Angeles to do the same.”