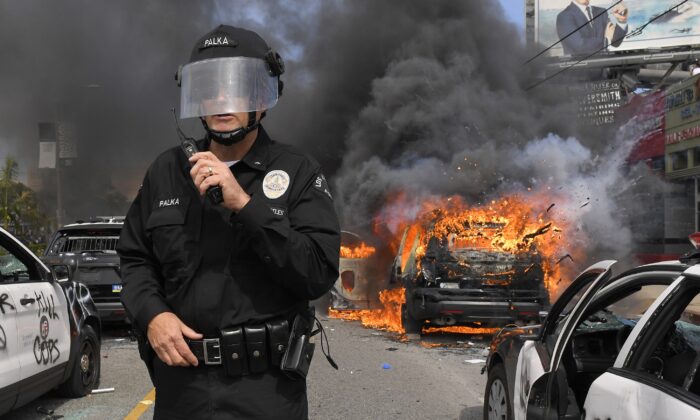 Los Angeles Police Department commander Cory Palka stands among several destroyed police cars as one explodes while on fire during a protest over the death of George Floyd in Los Angeles, Calif. on May 30, 2020. (Mark J. Terrill/AP Photo)
Southern California

Up to $150 million will be cut from the Los Angeles Police Department (LAPD) budget and directed to other programs, officials said.

L.A. Police Commission President Eileen Decker told reporters Wednesday that $100 million to $150 million will be cut from the LAPD budget.

Decker said the cut, along with other measures, are “just the first steps in what is a continuing journey for greater accountability, increased transparency, and the strengthening of our public trust.”

The other measures include working to “accurately portray the history of the police department” in training of police cadets.

Garcetti said at a press conference the money cut from the police and elsewhere would be invested “in jobs, in education and healing.” Efforts will be made, he said, towards “reinvesting in black communities and communities of color.”

Saying he supported the new or upgraded charges pressed against former Minneapolis police officers involved in the arrest of George Floyd, the Democrat added: “It is time to move our rhetoric towards action to end racism in our society.”

“Prejudice can never be part of police work,” he charged later.

L.A. City Council President Nury Martinez, also a Democrat, announced a motion to cut funding to the LAPD “as we reset our priorities in the wake of the murder of” Floyd.

The motion says the city’s administrative officer and chief legislative analyst, with help from the mayor, should work to identify “at least” $100 to $150 million in cuts from the LAPD’s budget.

The money should be redirected “back into disadvantages [sic] communities and communities of color,” the motion stated.

The LAPD has some 9,000 officers patrolling the second largest-city in the United States. According to the department, that’s one officer for for every 433 residents, giving Los Angeles one of the lowest ratios of police officers to residents of any major city in the country.

LAPD officials said in a statement that demands for law enforcement reform from protesters “are being heard” as it announced the department is establishing “an aggressive reform agenda, which continues the evolution of our commitment to 21st Century policing.”

Officials are also pushing for a change to the City Charter regarding the discipline of officers and supporting the establishment of an independent prosecutor who would prosecute police officers accused of misconduct.

LAPD Chief Michel Moore said at a virtual meeting Monday of rioters causing destruction in the wake of Floyd’s death: “His death is on their hands, as much as it is on those officers.”

Moore apologized, saying the next day that he “misspoke.”

“While I did immediately correct myself, I recognize that my initial words were terribly offensive. Looting is wrong, but it is not the equivalent of murder and I did not mean to equate the two,” he said.

Garcetti has ignored calls to oust Moore, saying he supports him.