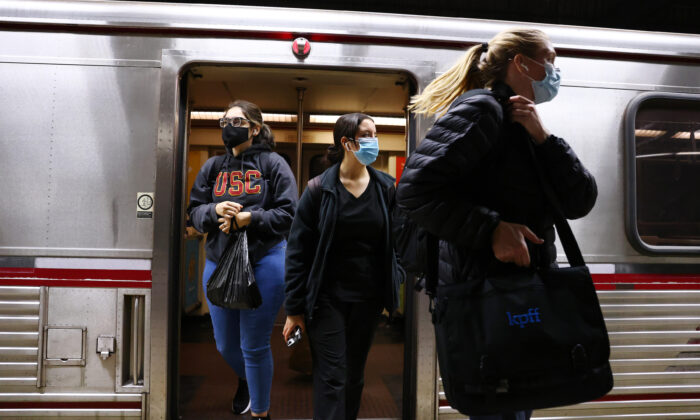 LOS ANGELES—Sheriff Alex Villanueva pledged to make local public transportation and coastal beaches safer this week by increasing patrol presence and enforcement amid a rise in crime in the county’s hot spots.

Villanueva said the Los Angeles Sheriff’s Department (LASD) will be cracking down on homeless people living on the trains after a string of violent attacks on riders over the last six months.

There are about 5,700 homeless people on Los Angeles County’s buses and trains, according to a count last August by the agency that operates the system, the Metropolitan Transportation Authority (Metro).

Beginning June 1, LASD will start the “Operation Safe Travel” program on the Metro lines, where increased patrolling and enforcement will be implemented to curb rising assaults.

Similarly, deputies will patrol beaches from Playa del Rey to Malibu during the summer months, known as the “Beach Patrol Mission.” The officers make up the LASD Sheriff’s Response Team and the Mounted Enforcement Detail.

“Summer is upon us and the last couple of years have been challenging for everyone,” Villanueva said May 26. “I want to remind the community that we’re doing our best, we’re stretching our resources so that people feel safe wherever they are, including the beach areas of Los Angeles County.”

The move comes as Angelenos are only a few weeks away from the June 7 primary election, where the issues of homelessness and a rise in crime are front and center.

Villanueva highlighted the importance of safety for travelers on the Metro lines after the recent attacks on passengers.

“This is just illustrative that when you have that large of a population of homeless people on the system, bad things will happen,” Villanueva said during a news conference May 24. “You have people that are under the influence of mental issues and they’re in a place where people are vulnerable.”

In January, a woman was attacked and killed at a bus stop near Union Station, and a passenger was pushed onto tracks by a homeless person at Willowbrook Station. In February, a homeless man was fatally injured by a train while sleeping on the tracks. And in other recent months, two female passengers were sexually assaulted at a train station, and another traveler was intentionally set on fire while riding the train.

“This is what happens when people are actually living on the trains,” Villanueva said. “They’re also urinating and defecating on the trains. There’s no restrooms on the trains, they will spend the entire day and night on the train. And this is problematic, and when they collide with the fare paying passengers, as we’ve already noted, it can be with deadly results.”

But Villanueva has been in a head-to-head battle with the Metro board over enforcement, as the board has been making an effort to find alternatives to policing on trains. Meanwhile, Villanueva threatened to pull the department’s security. Nonetheless, the board renewed its contract with the three agencies for another year until it can find a new model for security.

LASD officials said they’ll soon submit a proposal to deploy 600 deputies to patrol the Metro system for $30 million less a year compared to what the agency currently spends on security.

The sheriff will also deploy the department’s Homeless Outreach and Services Team (HOST) to patrol the Metro system and connect homeless people with services and mental health resources should they accept them.