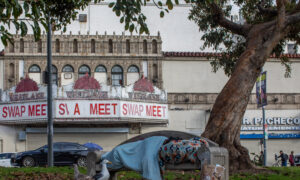 LOS ANGELES—A man fleeing police was killed after he wounded an officer during a running gun battle, authorities said.

Officers were making extra patrols at the housing project because of violence involving a gang there and a rival gang at another housing project that has resulted in 11 shootings and three deaths since July 15, police Chief Charlie Beck told KABC-TV.

Around 11 p.m. Monday, the patrolling officers approached a group of men that began to disperse and Risher ran off, police said.

As he was being chased, Risher pulled a handgun and began shooting at the pursuing officers, police said.

An officer was wounded. Beck visited him in the hospital before he was released.

“It’s a significant wound. I’m sure it hurts considerably, but at least it’s not life-threatening and it didn’t do significant muscle damage,” Beck said.

A gun was found at the scene, police said.

However, Risher’s mother, Lisa Simpson, told KTTV-TV that he was unarmed.

“He didn’t have nothing,” she said. “He was running, and he put his hands up, and they still shot him.”

The shooting comes as officers around the country are on alert following the targeted killings of police this month in Dallas and Baton Rouge, Louisiana.