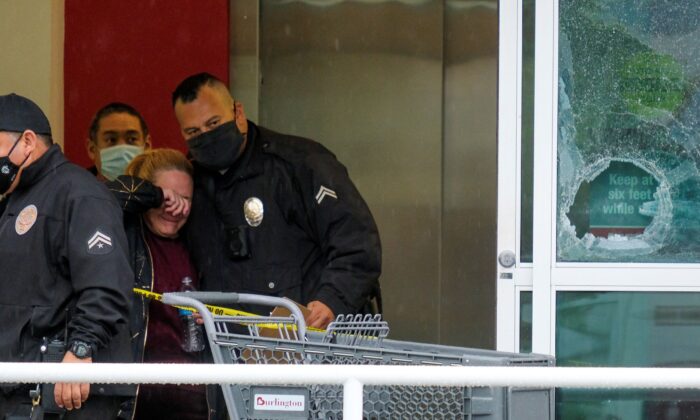 A police officer comforts a woman at the scene where two people were struck by gunfire in a shooting at a Burlington store as part of a chain formerly known as Burlington Coat Factory in North Hollywood, Calif., on Dec. 23, 2021. (Ringo H.W. Chiu/AP Photo)
Crime and Incidents

LOS ANGELES—Los Angeles police fatally shot a 14-year-old girl who was inside a clothing store dressing room Thursday as they fired at a suspect who had assaulted a woman earlier, authorities said.

Police also killed the male suspect, authorities said. He and the girl have not been named. The woman who had been assaulted was taken to the hospital with moderate to serious injuries.

The shots were fired around 11:45 a.m. at a Burlington store—part of a chain formerly known as Burlington Coat Factory—in the North Hollywood area of the San Fernando Valley.

Police initially responded to reports of a person being assaulted with a deadly weapon as well as reports of shots being fired, said Los Angeles police Capt. Stacy Spell at a news conference. Spell said officers opened fire when they saw the suspect assaulting another person.

The suspect was struck by the officers’ bullets and killed, Spell said.

One of the bullets went through a dressing room wall and struck the 14-year-old girl, according to LAPD Assistant Chief Dominic Choi. Officers later found her inside.

“You can’t see into the dressing rooms and it just looks like a straight wall of drywall,” Choi said at a second news conference.

Investigators do not yet know whether the teenager was in the dressing room before the violence began or ran in there to hide, he said.

Choi said authorities do not yet know the man’s motive or whether he knew the woman he initially assaulted in the store.

Los Angeles Fire Department spokesperson Nicholas Prange said that woman had moderate to serious injuries and was transported to a hospital. It wasn’t immediately known if she’d been shot but Choi said she had injuries to her head, arms, and face.

Police found a heavy metal cable lock near the suspect that they say may have been used in that assault.

Spell said the injured woman was the victim in the first assault report. It was not immediately clear what weapon was involved in that assault.

He added that police had received calls about the suspect acting erratically before the incident.

Imelda Garcia said her sister works in the store and was on break when she heard gunshots and everyone started running. Garcia said she spoke to her sister on the phone and that she’s OK but sounded “really nervous.”

Police escorted people out of the store nearly two hours after the shooting.

The shooting recalled a July 21, 2018, confrontation in which LAPD officers accidentally shot and killed a woman at a Trader Joe’s market. Officers got into a gunfight with a man who authorities say shot his grandmother and girlfriend before leading police on a chase that ended when he crashed his car outside the market.

A police bullet killed Melyda Corado, 27, the assistant store manager, as she ran toward the store’s entrance after hearing the car crash.

Atkins has pleaded not guilty to the killing.