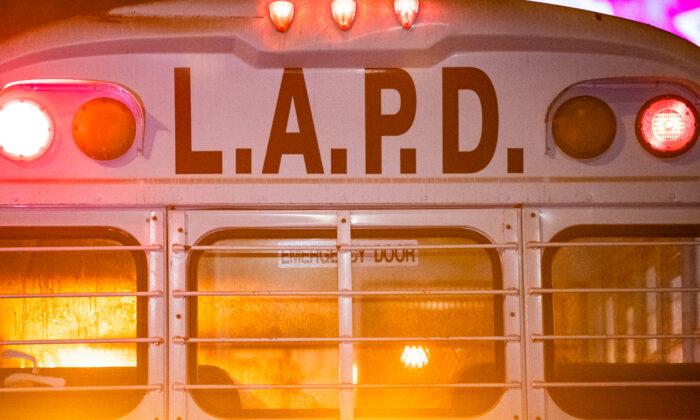 The proposed budget—which would bring the department’s general fund to $2 billion—will be sent to the mayor and city council for approval.

“We believe that establishing this goal, this high-water point, needs to be done,” Police Chief Michel Moore told the commission during the meeting. “Otherwise, we’re going to be satisfied with a workforce that is too small for the demands of the city and the needs of the city.”

The Los Angeles Police Department (LAPD) has been sounding the alarm all year about its shortage of sworn officers, as the department continues to lose more than it can recruit. In the last two years, the department has lost more than 260 people, and in the last three years, roughly 600 in personnel.

As a result of fewer officers in the city, there has been an increase in crime in several categories and longer emergency response times, according to the chief. Certain departments have been downsized or completely eliminated, such as the cold case unit and that which seeks fugitive warrants, Moore said in October.

Some of the proposed budget, about $105 million, will fund salary increases for sworn and civilian personnel, a recruitment program, and overtime expenses.

About $5.8 million will go toward updating the department’s technology equipment and facility maintenance.

The department is requesting $38 million for transportation equipment, and $10.6 million for salaries of officers at A Bridge Home shelters—interim housing for the homeless launched by Mayor Eric Garcetti in 2018. There are currently 27 shelters across Los Angeles as of November 2022.

The budget asks for 780 added sworn personnel to offset expected attrition, or 13 classes of 60 recruits for June 2024, bringing the department to full capacity of 9,523 officers.

“This is a number that balances the need to rebuild our sworn forces with existing recruitment and training capacity,” Trina Unzicker, commanding officer in LAPD’s Fiscal Group, told the commission. “We know that this will be a significant challenge given the recruiting difficulties that law enforcement agencies are experiencing across the country.”

Under public pressure from the George Floyd riots in 2020, the L.A. City Council voted to defund LAPD’s budget that November by $150 million, which Moore said at the time would cut back 350 sworn positions, reducing its ranks from about 10,100 to 9,700 by 2022.

However, a year later as the city grappled with rising crime due to the downsized and suspension of entire units, the City Council voted to increase the LAPD’s budget by 12 percent for the 2022–2023 fiscal year—bringing it up to $213 million.