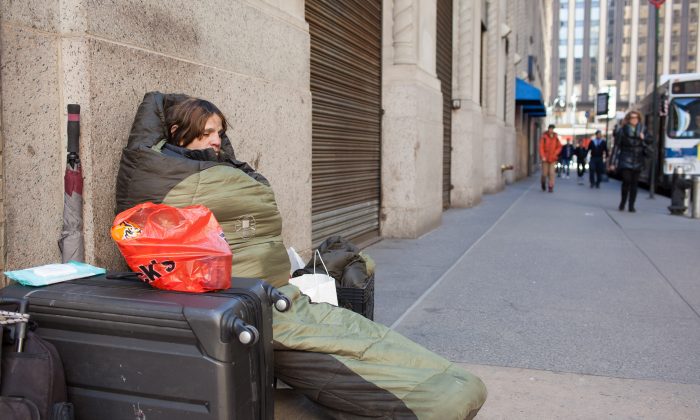 LOS ANGELES—It’s no secret to people who walk or drive the streets of Los Angeles that homeless people — tens of thousands of them — are everywhere.

On Tuesday, having looked at numbers showing the city’s homeless population has increased more than 10 percent over the past two years, officials announced they have decided enough is enough.

Mayor Eric Garcetti and several other elected officials stood outside City Hall — a few feet from several homeless people dozing on a lawn — to announce they plan to declare a state of emergency on homelessness and spend $100 million to eradicate it.

“These are our fellow Angelinos,” the mayor said. “They are those who have no other place to go, and they are literally here where we work, a symbol of our city’s intense crisis.”

Six blocks away, on the city’s notorious Skid Row, thousands more live permanently in tents, makeshift cardboard shelters and sometimes just on the sidewalk itself.

“If you walk five blocks south and one block over, you’ll enter the largest concentration of homeless in the country — about 4,000 homeless living in Skid Row,” said Councilman Jose Huizar, who co-chairs the City Council’s homelessness & poverty committee.

The emergency declaration and the funding will require action by the full City Council. Officials didn’t say exactly where the money will come from, but Council President Herb Wesson promised it would be found “somehow, some way.”

Huizar spokesman Rick Coca said afterward that officials anticipate it will come from the city’s general fund, adding “a more robust financial forecast for the city” is anticipated in the months ahead.

Councilmembers said they hope to have a draft strategic plan on homelessness by December.

The first rollout of funds — projected for Jan. 1, 2016 — would go toward permanent housing and shelter, according to Wesson’s office.

Garcetti had already announced plans Monday to release nearly $13 million in such newly anticipated excess tax revenue for short-term housing initiatives. The bulk of that money would be dedicated to housing homeless veterans.

Alice Callaghan, a longtime advocate for the homeless on Skid Row, said the proposed funding would not be nearly enough to stop the loss of affordable housing, especially in rapidly gentrifying areas of downtown and on the city’s west side.

Skid Row itself has been touched in recent years by that gentrification as aging hotels and abandoned buildings have been turned into expensive lofts, condos and apartments. Upscale coffee shops and restaurants now compete for space with homeless shelters and flophouses on the area’s 50 square blocks.

Experts blame that crisis on several factors, including the long recession, the city’s gentrification and its rapidly rising rents and home prices. Those events have combined to push the homeless population steadily higher since 2013, to a figure now estimated at 20,000.

Those factors also have helped push some out of Skid Row and many more all across the city. Some homeless now reside on bluffs overlooking freeways, in ocean-front parks and in hillside nooks and crannies. Others have moved right into suburbia.

A graphic map published by the Los Angeles Times in June — and drawn from statistics provided by the Los Angeles Homeless Services Authority — revealed people living in cars and tents in such fashionable areas as Brentwood and the wealthiest sections of the San Fernando Valley.

Earlier this year, a study by the city’s top budget official found Los Angeles already spends $100 million a year to deal with homelessness — much of it on arrests and other police services —but its departments have no coordinated approach for addressing the problem. Without clear guidelines, departments instead tend to rely on ad hoc responses, according to the report by City Administrative Officer Miguel Santana.

Callaghan said she fears this latest initiative is aimed more at “reducing the visibility” of the homeless ahead of a proposed bid to bring the Olympics to Los Angeles in 2024, rather than getting homeless people off the street permanently.

“They can spend billions on getting the Olympics,” she said of the proposal that anticipates spending $6 billion in public and private financing to bring the Games to LA. “But not on getting people off the sidewalks.”