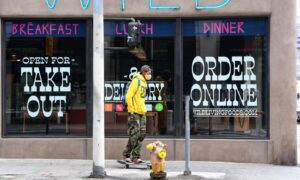 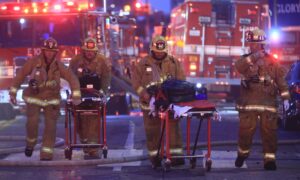 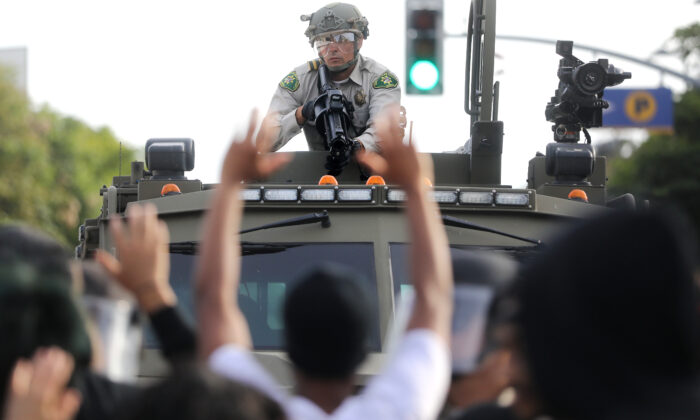 A police officer aims a nonlethal weapon as protesters raise their hands during demonstrations in the aftermath of George Floyd’s death in Santa Monica, Calif., on May 31, 2020. (Mario Tama/Getty Images)
US News

Los Angeles Mayor Eric Garcetti called on the California National Guard to patrol the streets of the nation’s second largest city on May 31 as protests intensified across the United States in response to the death of George Floyd in Minneapolis.

After Gov. Gavin Newsom declared a state of emergency for Los Angeles county, the state National Guard was deployed Sunday to assist with the response to demonstrations, which have shifted to violent rioting in cities nationwide.

In a tweet late Saturday, Garcetti said he had requested Newsom to deploy 1,000 members of the Guard to assist the 20,000 Los Angeles Police Department (LAPD) officers “to maintain peace and safety on the streets of our city.”

It marked a shift in response from the mayor who was previously dismissive of asking for aid from the National Guard.

The California National Guard is being deployed to Los Angeles overnight to support our local response to maintain peace and safety on the streets of our city.

“This is no longer a protest,” Garcetti told local media late Saturday shortly after imposing a curfew on the city from 8 p.m. to 5:30 a.m. “This is destruction. This is vandalism.”

“The vast majority of people taking to the streets are doing it peacefully, powerfully, and with reverence for the sacred cause they’re fighting for,” Garcetti said Saturday. “This curfew is in place to protect their safety—and the safety of all who live and work in our city.”

A curfew from 6 p.m. to 6 a.m. was later imposed on Los Angeles county’s 10 million residents as protests across much of Southern California descended into violence. Protests across the United States flared in response to the treatment of Floyd, who died earlier this week in the custody of Minneapolis police.

A widely circulated video showed Floyd, 46, lying down and handcuffed as a police officer was seen kneeling on the man’s neck for nearly 9 minutes. The footage showed Floyd telling officers that he couldn’t breathe before his body went motionless. According to a Minneapolis Fire Department report (pdf), Floyd was unresponsive and “pulseless” when he was being transported into an ambulance by paramedics from the site of his arrest to the hospital.

According to preliminary autopsy findings by the Hennepin County Medical Examiner, Floyd did not die due to strangulation or traumatic oxygen deprivation. The autopsy report cited in the complaint (pdf) against Chauvin suggests he died from a combination of heart disease and “potential intoxicants in his system” that were aggravated by the restraint placed on him by officers.

Some 400 people were arrested on Saturday by the LAPD, who deployed batons, beanbags, and teargas in an attempt to quell the violence. National Guard troops meanwhile were seen stationed Sunday morning at LA’s Convention Center.

CVS and a Target store, along with a number of local businesses, were targeted by looters, while shops in LA’s Beverly Hills were vandalized, and fires could be seen burning near the popular Farmer’s Market near the Grove. Protests in other cities have seen similar destruction including clashing with police, breaching of government complexes, and throwing of objects at police officers in some parts of the country.

Newsom warned Sunday that local authorities were closely monitoring the movements of violent extremist groups, who may be exploiting the otherwise peaceful protests to further their own agendas.

“To those who seek to exploit Californians’ pain to sow chaos and destruction, you are not welcome,” Newsom said. “Our state and nation must build from this moment united and more resolved than ever to address racism and its root causes.”

His comments came as Attorney General William Barr on Saturday expressed concern that the violence within these protests appears to have been “planned, organized, and driven” by groups of outside radicals and agitators who are exploiting the situation in order to achieve “their own separate and violent agenda.”

Barr said many of these individuals who have traveled out of state are using Antifa-like tactics to promote violence.

“Unfortunately, with the rioting that is occurring in many of our cities around the country, the voices of peaceful protest are being hijacked by violent radical elements,” the attorney general said.

Barr acknowledged the outrage felt by the national community, saying that accountability for Floyd’s death must be addressed, but emphasized that it should be addressed through the regular criminal justice system.

He stressed that the communities and streets “must have law and order” and it is the responsibility of local and state leaders to halt the violence, adding that the Justice Department will support all local efforts.

But the attorney general warned that “it is a federal crime to cross state lines or to use interstate facilities to incite or participate in violent rioting.”

“We will enforce these laws,” he said.

President Donald Trump announced Sunday that his administration would be designating Antifa as a terrorist organization, after commending the National Guard for shutting down looting and riots in Minneapolis that he said were steered by “ANTIFA led anarchists, among others.”