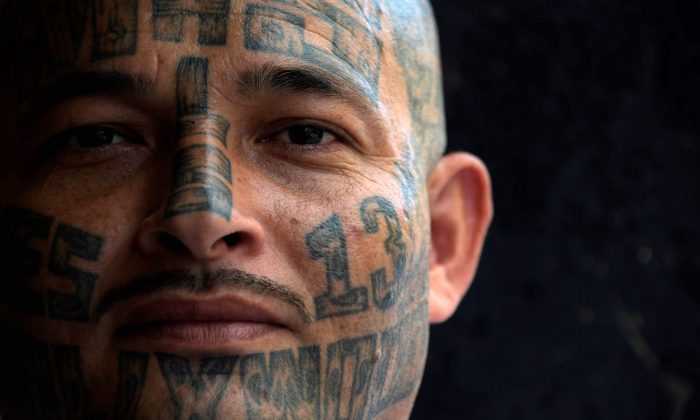 A file photo of a member of the MS-13 gang in Chalatenango prison, north of San Salvador, El Salvador, on March 29, 2019. (Marvin RecinosAFP/Getty Images)
Southern California

The U.S. Attorney’s Office in Los Angeles recently indicted 22 members of the MS-13 gang, known as the “Fulton clique,” for crimes dating back to 2010.

The gang members were charged in connection with a series of increasingly brutal murders and executions, including cases where victims were hacked to death with machetes and had their hearts cut out of their chests.

According to records provided to The Epoch Times by the Los Angeles County District Attorney’s office, the 22 defendants face charges that include murder, assault, robbery, trafficking in narcotics, and possessing dangerous weapons, including machetes and firearms.

MS-13, also known by its Spanish name Mara Salvatrucha, was formed in the mid-1980s in Los Angeles, and is now a transnational gang, with operations in at least 10 states and several Central American countries including El Salvador, Honduras, and Guatemala.

Thom Mrozek, spokesman for the U.S. Attorney’s Office in Los Angeles, spoke about the indictment and the continuing issue of Central American-related gang activity in Southern California in an interview with The Epoch Times.

“In this indictment and in this case, we talk about a significant uptick in violence associated with MS-13 in recent years, particularly since the beginning of 2017. Much of that violence is associated with the San Fernando Valley-based Fulton Clique of MS-13, which is the largest of the 20 or so cliques in the Los Angeles region,” Mrozek said.

Mrozek said that, in recent years, the younger generation of MS-13 members from Central America has been utilizing methods that are much more intense and violent than their predecessors. They also want to sever ties the Los Angeles-area clique had historically developed with the Mexican Mafia.

“There appears to be a movement driven by MS-13 elements in Central America to change the operations of MS-13 Los Angeles … to try to eradicate what is identified in the indictment as the Los Angeles program, which is essentially MS-13’s affiliation with the Mexican Mafia prison gang here in the Los Angeles area, an affiliation that doesn’t exist anywhere else where they function,” he said.

The younger members appear to be trying “to bring MS-13 back to what they consider to be its roots, which is what you saw in the 1980s and 1990s where you saw extreme levels of violence,” Mrozek said. He also said a high number of illegal aliens were included in the indictment.

“In the federal case that we unveiled this month, there are 22 defendants. Nineteen of those defendants are illegal aliens, almost all of whom arrived here in the past roughly three to four years, so they are recent arrivals in the United States and most of them are illegal aliens. The violence and the murders that are discussed in the indictment can be attributed by and large to young, recent immigrants to the United States,” he said.

Mrozek went on to describe the indictment itself and how it reflects a change in tactics for the transnational gang.

“What we have documented in the indictment are a series of murders, seven of them, over roughly the last two years, most of which all extreme levels of violence, meaning bodies hacked to pieces, committed by young people,” he said.

Mrozek said that the Salvadorian government allegedly entered into an agreement with the gang to try to curb the violence. As part of the deal, MS-13 reportedly agreed to take their victims off the streets and out to the mountains to be killed, to avoid attracting too much attention. Mrozek said that when the younger members heard about his, they responded with even more violence.

He added that MS-13 has historically been able to easily cross the U.S.–Mexico border to benefit their gang activities in Southern California and beyond.

“MS-13 is a criminal organization with resources and contacts. They have proven, over the years, the ability to cross the international border and enter the United States, or in some cases go back to Central America, with impunity no matter what level of security the United States is posing,” he said.