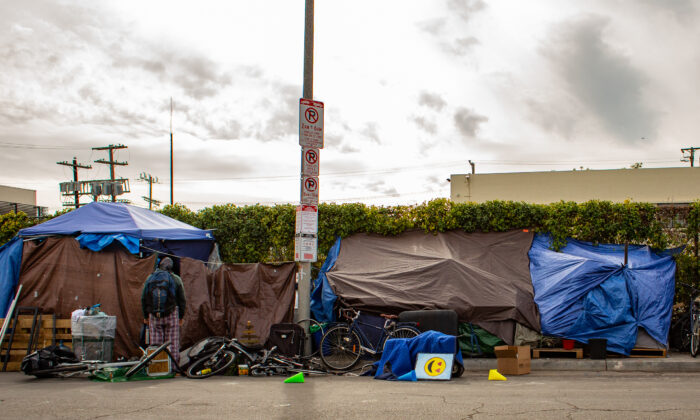 LOS ANGELES—Los Angeles City Councilman Gil Cedillo confirmed today that the lakeside portion of MacArthur Park, where about 200 homeless people have taken up residence, will temporarily close on Oct. 15 for “much-needed deferred maintenance.”

The park’s south side, between Alvarado and Park View streets and Wilshire Boulevard and Seventh Street, will close for 10 weeks starting at 10 p.m. Oct. 15. The people living there are being offered shelter by teams with the Los Angeles Homeless Services Authority (LAHSA) and People Assisting the Homeless, according to Cedillo’s office, which said that about 164 people had already been moved indoors as of Wednesday. Outreach began in January, Cedillo’s office said.

Residents are being offered Project Roomkey placements in hotels and motels in the mid-downtown area, said Cedillo’s Deputy District Director Jose Rodriguez. He added that people living in the park would not be stopped from relocating to the north side of the park, across Wilshire, during the south side’s closure, and the city will continue outreach and trash collection to those unhoused residents.

The move to close the park drew criticism from housing advocates on Twitter, comparing the anticipated closure to that of Echo Park in March. While Councilman Mitch O’Farrell, who oversaw that operation, touted it as a successful housing operation.

On Sept. 27, KNX-1070’s Claudia Peschiutta shared data on Twitter from LAHSA showing that only four of Echo Park’s residents were placed into permanent housing. In response to that data, O’Farrell said his team worked to put Echo Park’s residents into transitional housing and “it is the role of LAHSA, and their contracted service providers, to take it from there.”

Protesters who took to the Echo Park neighborhood in March blasted the city for forcing the park’s residents out of an area that had grown into what they called a supportive community—including a vegetable garden, working showers, and a shared kitchen. In response to protests, hundreds of officers descended on the neighborhood and 182 people were arrested.

MacArthur Park Neighborhood Council Board Member Tom Bellino said on Sept. 28 that the Los Angeles Police Department told neighborhood council members that the park would be reclaimed “much like with Echo Park.”

“I will not stand by while another ‘Echo Park’ happens here,” he said.

The chart also notes that the park’s fencing will be removed once the project is complete, while Echo Park’s fencing remains up with four entrances available to the public.

O’Farrell responded to the chart in a statement Monday, saying: “It is not acceptable to allow people to live and die in squalor in public parks or public spaces, which is why my team and I—along with many partners—worked hard for several months to ensure success in providing
housing solutions and services to nearly 200 people who had been living at Echo Park Lake. Others are free to compare and contrast Echo Park Lake to other locations in the city, but my focus will remain on my district, my constituents and my work to house the unhoused.”

Cedillo’s office said the goal of the rehabilitation project is to make the park safe and clean for residents of the dense neighborhood, many of whom don’t have other outdoor space. The park’s maintenance has been deferred for more than 19 months due to the COVID-19 pandemic.

“We want to provide a safe, clean and secure park for all people that come to MacArthur Park to play, relax and enjoy this precious open space that lies in the heart of our low-income neighborhood of Westlake,” Cedillo said.