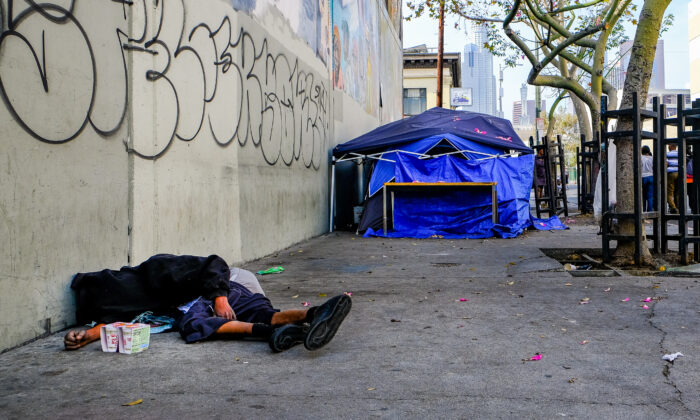 LOS ANGELES—The number of homeless deaths in Los Angeles County increased over 50 percent during the first year of the pandemic due to drug overdoses, according to a recent report by the Department of Public Health.

The overall deaths among the homeless population across all racial-ethnic groups increased from 1,271 in 2020 to 1,988 in 2021, the April 22 report found (pdf), but added the trend is consistent with a longer-term increase in homeless deaths from drug overdoses since 2014.

Exacerbated by the COVID-19 pandemic, overdose deaths saw a 78 percent uptick from “the pre- to post-pandemic onset year.” Other causes of death on the rise include homicides, up by 49 percent, traffic injury, up 33 percent, and coronary heart disease, up 29 percent.

The last homeless count recorded 66,000 homeless people on the streets countywide and more than 41,000 in the City of Los Angeles in 2020. The 2021 count was canceled due to COVID. The results for the 2022 count are slated to be released this summer.

Homeless providers in Los Angeles say they aren’t surprised by the statistics since the county is “politically” following a “Housing First” system to get homeless people off its streets and into transitional housing without adequately addressing substance abuse first.

Housing First, which refers to a policy created under Senate Bill 1380 in 2016, requires all state agencies and departments that fund homeless programs and housing services adopt regulations that include placing them in housing or permanent supportive units.

“When you don’t have any detox facilities for people that want to get sober, and when you’ve got fentanyl, meth, alcohol, and oxycontin, these are all things that are symptoms to people that are in trauma,” Brian Ulf, SHARE! Collaborative Housing co-founder and member on the LA Police Department Community Advisory Board, told The Epoch Times.

“If you don’t start to peel the onion as to why they’re in trauma, they’re all going to continue to do this,” he said.

Ulf, who is 20 years sober himself, said homeless people addicted to drugs need to be in a recovery environment with “lived experience” counselors who have gone through similar struggles, or counselors who at least have years of experience dealing with recovering addicts who have had trauma in their lives.

“The other problem, the reason that this death rate is so high is because there’s no [enforcement], so the drugs themselves and all the access to it all is so rapid and no one no one does anything to stop them,” he said.

Additionally, Ulf said he thinks corruption within the temporary housing units is comparable to jails where drugs are smuggled in. Many times, he said, he’s seen drug dealers who also live in the temporary units distributing drugs to the homeless people living in them.

“The drug dealers are bringing the drugs into these guys because when you walk in, you don’t have to sit there and get in line. You’re in the food den; they pass the drugs to each other the same way they do out on the street, so it creates a very dangerous environment,” he said.

Temporary supportive housing units in Los Angeles that adhere to the “Housing First” practices and receive state funding don’t require sobriety for entrance, but they prohibit drugs, alcohol, and weapons inside the units. Most of them follow a “harm reduction” model which focuses on curbing overdoses by administering reverse-overdose drugs, such as Naloxone, or Narcan, and focusing on “meeting people where they’re at.”

“The housing first model was meant for the one percent of chronic homeless, but they sweep everybody into one box, and nobody all fits in one pot, each person is completely different,” Ulf said.

Critics of this approach say without proper encouragement to enter recovery, the deaths due to overdoses will continue to climb.

In Venice Beach, fentanyl is rampant on the streets, according to Butch Say. Say lived in Venice Beach in an RV for four months and sang karaoke on the Boardwalk and Ocean Front Walk, then left to travel to other states.

“It’s very accurate on the overdose; fentanyl is big there,” Say told The Epoch Times. “Parts [of the Boardwalk] are cleared up but new people show up every day.”

Outreach workers on the ground in Venice know all too well the damage that drugs like meth and fentanyl are creating in neighborhoods. Last September, three individuals in Venice Beach died from an overdose on fentanyl-laced cocaine.

According to the Drug Enforcement Administration, fentanyl—a synthetic opioid—is 80 to 100 times stronger than morphine.

Stan Mohammed, a co-founder of the Venice-based gang prevention nonprofit HELPER, told The Epoch Times “it’s going to get worse before it gets better.”

“It will require, in my opinion, a full-fledged state of emergency because it’s not just [LA] county, it’s the country,” Mohammed said. “It will take political will—so right now everybody is focused on the Ukraine crisis, homeless crisis, but nobody is talking about the drug epidemic.”

Most of his clients that his foundation services are addicted to drugs in Venice Beach, although it’s unclear how many of them choose fentanyl. Nonetheless, Muhammed said he’s “sure many of them have” come in contact with it at some point.

“It’s something that doesn’t require a lot of usage to die from. A lot of the people that [are] out there, they’re not conscious of it, and as a result, they’re dying,” he said.

Jim Palmer, President of the Orange County Rescue Mission—a nonprofit homeless provider—told The Epoch Times that 87 percent of homeless people they’ve screened self-identified with an addiction, a mental health issue, or both. Similar to Los Angeles, fentanyl also remains an issue in the southern county.

“What we’re finding is there is an increase in deaths as an increase in deaths of homeless here in Orange County,” Palmer said. “What’s interesting is typically the second category down would be identified as heart attacks, heart condition, cardiovascular issues, things like that … and so that many of those even in that second category, under addiction, are also dying because of the effects of the addiction.”

Even though Orange County’s homeless population is much smaller than LA’s, with only 12,000–15,000 homeless people each year, the causes of homelessness are the same in LA.

“It’s very similar, because a lot of the homeless population intermingles anyways, some people that had been in Anaheim for 10 years might find themselves in Skid Row in Los Angeles for some reason,” he said.

When it comes to homeless fatalities in these two counties, Palmer said “the fentanyl crisis will continue to grow the number.”