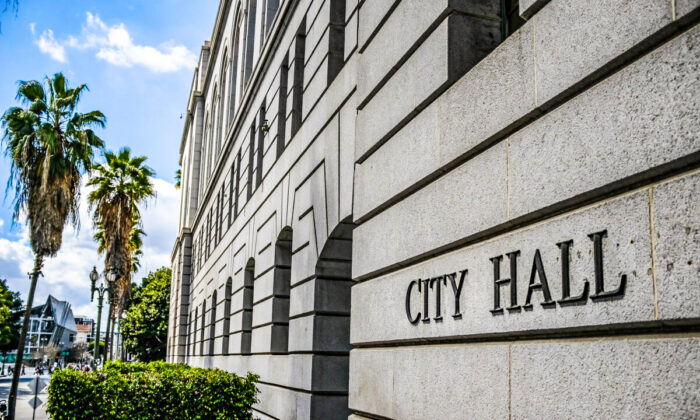 LOS ANGELES—A real estate developer was found guilty on June 27 of paying a $500,000 bribe to then-Los Angeles City Councilman José Huizar in order to “grease the wheels” for the approval of a downtown condominium project.

Dae Yong “David” Lee, 57, of Bel Air, was the first defendant to go on trial in the City Hall corruption scandal surrounding Huizar and his associates.

Lee and his 940 Hill company—named for the address of the proposed downtown retail and residential project—were convicted of bribery, honest services fraud, and obstruction.

U.S. District Judge John Walter scheduled a Sept. 19 sentencing hearing, at which time Lee will face up to 40 years in federal prison for the fraud and obstruction counts, and up to 10 years for bribery. His company faces a fine of $1.5 million or twice the gross gain or gross loss from the offense.

Evidence at the nine-day trial showed Lee used Huizar associate Justin Kim to transfer bags of cash on behalf of his company to the councilman’s aide, George Esparza. Within days of payment, Huizar smoothed out a bureaucratic tangle that had halted the proposed mixed-use development from going forward, according to testimony.

At the time, Huizar was head of a powerful city planning committee that reviewed the city’s biggest development projects.

Assistant U.S. Attorney Cassie Palmer told the jury during her opening statement that Huizar’s vote was needed to “grease the wheels” for approval of Lee’s project.

Palmer said Huizar’s “vote mattered, and the defendant knew his vote mattered. They needed José Huizar on their side.”

Defense attorney Ariel Neuman argued that his client had been conned by Kim, who told the developer the cash was needed to pay administrative fees.

“He made the mistake of trusting the wrong person,” Neuman said of Lee. “He was taken advantage of by a liar and a thief. David Lee did not knowingly or intentionally bribe anyone. He thought he was paying a consulting fee.”

Kim admitted to facilitating the payment from Lee and pleaded guilty to a federal bribery offense. Lee and 940 Hill were also convicted of falsifying accounting and tax records to cover up the bribe—the basis for the obstruction charge.

Both Kim and Esparza took the stand for the prosecution at Lee’s trial.

The judge instructed the jury Monday morning before the case was handed to the jury.

Walter broke up the complex six-defendant indictment involving Huizar and his associates into three separate criminal trials after finding that the size of the case against Huizar alone would likely overshadow evidence against the co-defendants.

Huizar and former Deputy Mayor Raymond Chan, who was general manager of the Department of Building and Safety before becoming the city’s deputy mayor of economic development, are scheduled to be tried together on racketeering conspiracy, bribery, honest services fraud, and other charges in February.

Huizar, the central figure in a six-year probe of suspected corruption in City Hall politics, is accused of receiving $1.5 million in cash and benefits as part of a pay-to-play scheme in which developers were shaken down for cash and campaign donations in exchange for help getting downtown real estate projects through the city’s approval process.

Huizar’s lawyers deny the allegations against their client, claiming the former councilman was mere “an evangelist for robust development” in downtown and Boyle Heights, which he represented from 2005 to 2020.

An October trial date is scheduled for Shen Zhen New World, a company owned by a fugitive Chinese billionaire developer who is also a defendant. The company, which acquired the L.A. Grand Hotel Downtown in 2011, planned to redevelop it into a 77-story tower, allegedly in a quid pro quo arrangement with Huizar. The developer, Wei Huang, is believed to be in China and has never appeared for a court date in the case.