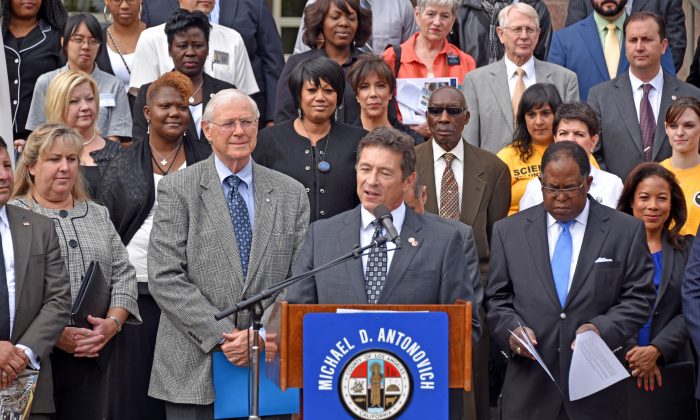 “The city is particularly vulnerable to the destructive effects of wildfires, flooding, mudslides, and earthquakes. Because of the many threats that LA faces, the importance of readiness as a city and for residents cannot be overstated. Our department, the Emergency Management Department, was established in 2000 and is considered the ‘hub of the wheel’ because it manages the city’s response to and recovery from and emergency, crisis, disaster or significant event,” she continued.

She explained that, depending on the severity of a disaster, the city responds first, then the county ad state, with the possibility of calling for national assistance for particular situations.

Key for Immediate Human Response in an Emergency

“The faith-based community and other community-based organizations are vital partners in our effort to prepare our county residents and empower them with knowledge about what actions to take before, during, and after a disaster,” Los Angeles County Mayor Michael Antonovich said.

The first three days after a major disaster are key for personal and family safety. Without water or power, a community needs to quickly assess its situation. More so is the need to locate and unify all family members for safety in such conditions.

People involved in disasters have noted that people in faith-based or community-based organizations develop close bonds of trust, naturally becoming more cognizant through their mutual friendships of where each other’s children are. This also extends to others in their neighborhood and circle of faith or otherwise, such as with the elderly, bedridden, and those with other maladies or handicaps. In some cases, medical equipment needs immediate attention if the power fails.

Almost all speakers at the event discussed the value of faith-based emergency response. From block and street captains, down to families and locating their members, uniting them is the purpose of faith-based community participation. The various faiths in a community work together and knit close relationships that already are natural. Fathers and especially mothers know where their children and their elderly are.

The program is one where teams in an area get together and plan for emergencies and who will do what, when, and how. This is the first and most important action in developing a “Prepared Community.”

“Many of the groups we’re reaching out to are already serving their constituencies,” said Dr. Jannah Scott, deputy director of the Office of Faith-Based and Community Initiatives. “But with the proper training and coordination with local Voluntary Organizations Active in Disaster [VOAD] and state and local emergency management and public safety officials, they can be an even greater asset.”

In closing the event, Mayor Antonovich said that “The city is getting closer to its goals of emergency management in Los Angeles.”