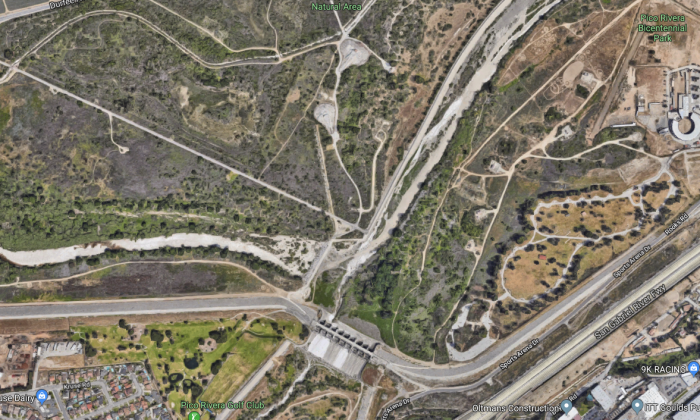 The Whittier Narrows Dam can be seen on Google Maps. (Screenshot/GoogleMaps)
Southern California

The Los Angeles County Board of Supervisors voted unanimously on Feb. 26 to push forward to acquire the ownership of 40-mile flood control channels that are now operated by the U.S. Army Corps of Engineers (USACE). It also requested that Congress allocate about $600 million to repair Whittier Narrows Dam, which a study found might fail in a megastorm.

Under the vote, five supervisors of Los Angeles County will collectively send a letter to the Los Angeles County Congressional Delegation, asking its support for “a disposition study to examine transferring ownership and operations of USACE-owned channels to the district,” according to a motion proposed by supervisor Hilda Solis.

The motion says the USACE wasn’t able to secure all the funds needed to maintain its facilities, therefore affecting part of the county’s flood control system by lowering its capacity of reducing flood risk.

Update: SR-243, there are two closures in place. Hurley Flats to I-10, and at Saunders Meadow. pic.twitter.com/LUHRxHYwM2

Director of Los Angeles County Public Works Mark Pestrella estimated that there is more than $200 million of deferred maintenance for the flood control system, but the USACE receives less than 10 percent of that amount annually to address the problem.

After taking over the 40-mile channel, the county will be able to improve the efficiency in designing, building, and maintaining flood risk management projects, the motion states. It will also make it easier for the county to clean up channels and banks that are occupied by encampments built by the homeless population, who are subjected to danger when the area is flooded.

Pestrella said he has received positive feedback from President Donald Trump, the White House, and members in Congress, supporting the idea of giving up local facilities to the locals.

Supervisor Kathryn Barger said she agreed with the idea of consolidating control of the flood control system but wanted “to make sure that we’re not letting the federal government off the hook” with regard to the Whittier Narrows Dam.

The areas both upstream and downstream are highly urbanized with approximately 10 cities located between the Santa Fe and Whittier Narrows Dams and 25 cities between the dam and the Pacific Ocean with around 1 million people.

A study conducted by the USACE indicated that the dam might not withstand an epic storm due to overtopping and erosion caused by seepage, which could result in hundreds of thousands of pounds of water per second rushing toward homes downstream.

In February, California sustained damages caused by consecutive waves of storms that sparked fears of an ARkStorm, a rare megastorm that could last for weeks and produce massive rainfall and floodwater, which could wreak havoc and impact more than 1.5 million people with cities and lands inundated. The overall resulting storm damage could be $725 billion statewide, tripling the damage of a major earthquake, according to U.S. Geological Survey.

If the dam fails during an epic storm, one of the hardest-hit communities would be Pico Rivera, which sits directly below the dam. It is estimated that the city could be under 20 feet of water and nearby Downey could see 15-foot levels.

Congressional authorization is needed to upgrade the dam, which is estimated to cost as much as $600 million. In a separate motion, the board voted to urge the federal government to quickly provide that funding.

“The rehabilitation of the Whittier Narrows Dam is a high priority because of the significant loss of life and high economic impacts that hang in the balance,” Solis said. “Millions of L.A. County residents live downstream of the dam, and we cannot afford to wait to begin these upgrades.”

The City News Service contributed to this report.