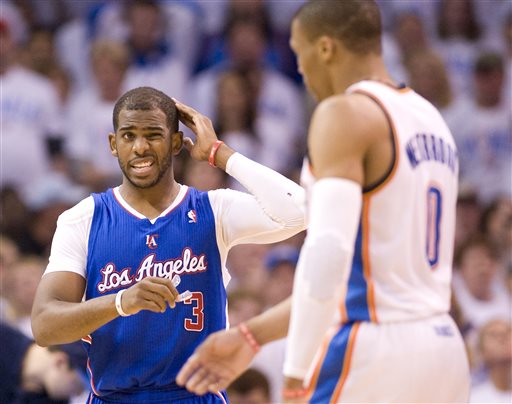 Los Angeles Clippers' guard Chris Paul rubs his head during a timeout after a foul was called on Oklahoma City Thunder's guard Russell Westbrook for bumping Pauls head during the first half in Game 5 of the NBA Western Conference semi-finals at the Chesapeake Arena in Oklahoma City on Tuesday, May 13, 2014. (AP Photo/The Orange County Register, Michael Goulding)
NBA

The Los Angeles Clippers will try to force a game 7 against the Oklahoma City Thunder on May 15.

Tip-off at the Staples Center in Los Angeles is slated for 7:30 p.m. PDT.

If the Clippers win then game 7 will be on Sunday in Oklahoma City. That game would start at 5:30 p.m. PDT.

The winner of this series will advance to the Western Conference finals to face the San Antonio Spurs.

The Spurs took out the Portland Trail Blazers 4-1 in the second round, finishing the series on Wednesday night.

See an Associated Press preview below.

LOS ANGELES—Chris Paul’s teammates figure he might need more time to fully recover from his role in one of the ugliest playoff collapses in NBA history.

With the Los Angeles Clippers’ season riding on Game 6, Paul knows he doesn’t have that luxury.

The Oklahoma City Thunder are back at Staples Center on Thursday night, and the Clippers must shelve their memories of the mistakes late in Game 5 that cost them a chance to close out the series at home.

Blake Griffin and Jamal Crawford went to work on Paul’s mind on the bus ride to their flight home from Oklahoma City after the Clippers blew a 13-point lead in just over four minutes. The fiasco culminated in the All-Star point guard’s touch foul on Russell Westbrook to set up the winning free throws, sandwiched between two brutal turnovers by Paul — all in the final 14 seconds.

“He was visibly upset, and I told him that game is not on one guy,” Griffin said Wednesday at the Clippers’ training complex. “It’s not on him. We made plenty of mistakes down the stretch, plenty of mistakes throughout the game that could ultimately change the outcome. That idea that the game is on him, you understand what he’s saying, but it’s not on him by any means. We still have two games left to play.”

The Clippers’ roller coaster of a postseason has careened into another valley after the Thunder stormed back from near-certain defeat with the help of Paul’s mistakes and a much-debated out-of-bounds call with 11.3 seconds left.

Clippers coach Doc Rivers hadn’t changed his opinion one day after declaring the Clippers “were robbed” on that call, although he said he won’t file any formal protest. The NBA issued a statement Wednesday night saying the call was made correctly in the absence of clear evidence to change it on replay review.

Paul still appeared glum, giving short, clipped answers to questions about his turnovers and the Clippers’ ability to bounce back in Game 6.

“I woke up this morning with a beautiful wife and two beautiful kids,” Paul said. “At the end of the day, it is basketball, but there’s a lot of guys’ livelihoods who depend on it, so I’ve got to do my part.”

After three weeks of a circus atmosphere around the Clippers, Rivers still believes his young team has gathered enough resilience to force the series back to Oklahoma City for a deciding game. The Clippers played 43 outstanding minutes in Game 5 to reach the brink of what could have been a benchmark victory in a shift of the Western Conference hierarchy, only to let it slip away.

“You don’t win it easy,” Rivers said. “We’re trying to do something special here and be something special. And if you’re trying to stand out in any job, it’s going to be hard. You’re going to face adversity, and you’ve just got to accept that that’s part of the process. Yeah, this is hard. It’s supposed to be. And that’s the only thing I told our guys. What’s going on right now is exactly what should happen to win. You have to go through stuff to win, and you’ve just got to deal with it.”

The Thunder traveled to the West Coast on Wednesday with a bit of house money after the comeback by Westbrook and Kevin Durant, who combined for 17 of Oklahoma City’s 19 points in the final 9½ minutes while Los Angeles fumbled, stumbled, and finally crashed. Oklahoma City could advance to its third Western Conference final in four years with a victory in Game 6.

But the Thunder also recall their own collapse in Game 4 at Staples Center, where they blew a 16-point lead with nine minutes left last weekend. Game 5 told coach Scott Brooks plenty about his team’s tenacity.

“I like the fact that we did that after the game before,” Brooks said. “We had a lot of opportunities to win that game.”

Neither team has been significantly better in this series: Los Angeles has cumulatively outscored the Thunder 540-539 through five games, with Oklahoma City’s two-man offensive game countering the Clippers’ more balanced attack.

But even after the exhaustion of a seven-game first-round series with Golden State and the continuing drama surrounding owner Donald Sterling’s lifetime ban, the Clippers’ leaders think they’ve still got more fight.

“I think we’ve done a pretty good job this season and in the postseason of putting things in the past and just moving forward,” said Griffin, who leads the Clippers with 24.2 points per game in the series.