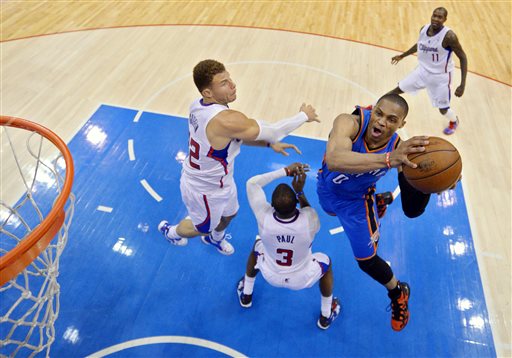 The Los Angeles Clippers try to avoid a 3-1 deficit against the Oklahoma City Thunder on Sunday afternoon.

The Thunder grabbed the series lead after a thrilling game 3 on Friday.

Live streaming will be available through ABC Go.

See a preview from the Associated Press below.

Clippers focus on trying to stop rest of Thunder

LOS ANGELES—Kevin Durant and Russell Westbrook are back to their old selves after getting thrashed by 17 points to open their series against Los Angeles.

The Clippers can live with their numbers — Durant topping 30 points in two straight games and Westbrook just missing another triple-double; it’s the rest of the Thunderthey want to stop.

“We got to come right back at them,” Blake Griffin said Saturday.

After getting little offensive support in losing Game 1 at home, Durant and Westbrook have seen their teammates step up. Defensive stopper Thabo Sefolosha scored 14 points in Game 2 before foul trouble limited him Friday.

Serge Ibaka missed just one shot in scoring 20 points, and reserves Reggie Jackson and Caron Butler chipped in 14 points each in giving Oklahoma City a 2-1 lead in the Western Conference semifinal series heading into Game 4 on Sunday.

“We can’t then give Caron Butler wide-open 3s,” Clippers coach Doc Rivers said. “Serge Ibaka has yet to put the ball on the floor. I’d like to see him dribble one time.”

The Thunder have won two games in a row after that Game 1 shellacking, which was their worst loss since moving to Oklahoma City.

Behind Durant’s 36 points and 23 from Westbrook, the Thunder shot 56 percent in winning 118-112 on Friday. The Clippers were held to 45 percent, while making 21 of 25 free throws and committing just six turnovers. That many points, free throws and so few mistakes usually win them games.

“What we didn’t get is stops,” Rivers said. “When we get multiple stops, we get in transition and we get easy baskets. In this series so far we really haven’t gotten in transition at all and they’ve taken that away from us. We got to do a better job of getting stops in a row so we can get some kind of offensive rhythm in transition.”

Durant said Game 4 will be the toughest of the series, knowing the Clippers are unlikely to shoot as poorly as they did Friday night.

“Our guys are locked in on the next game,” he said. “We haven’t played our best defensive game yet and we want to bring that. We’re concerned how much better we can get and grow.”

Westbrook has exemplified his team’s growth since the series began, taking fewer shots and focusing more on passing and getting his teammates involved.

“I got into a rhythm and I’m trying to get into a routine,” he said. “I’m trying to balance my game and it’s tough at times, but as long as we are winning it’s all good.”

Griffin was bloodied but unbowed after taking an elbow in the nose from Ibaka. TheClippers’ All-Star forward didn’t get the foul call he wanted in the third quarter Friday; instead, his team was charged with a 3-second violation.

Griffin attributed his bulldog mentality to the way the referees called the game. Taking that same approach in defending Durant and Westbrook is a different story. Those two usually end up at the free throw line, where both are top-notch shooters.

“You can’t really get up into them,” Griffin said. “Everybody else we need to do a better job of limiting their easy looks by being up into them.”

Chris Paul had 21 points, 16 assists and no turnovers playing 42 minutes Friday, when Griffin scored 34 points. Jackson and ex-Clipper Butler combined to outscore the Clippers’ reserves on their own.

Offensively, Paul will be looking to get J.J. Redick more shots than the six he attempted in Game 3. Defensively, he wants to limit the number of easy shots taken by Durant and Westbrook.

“We just got to play and not necessarily worry about being desperate,” Paul said. “We understand it’s not time to hang our heads. We just need to get game four.”

In their humble playoff history, the Clippers have never come back from a 2-1 deficit to win a series.

“Any of those stats don’t matter,” Rivers said, laughing. “If you’d said the Lakers or the Celtics, then that would matter.”