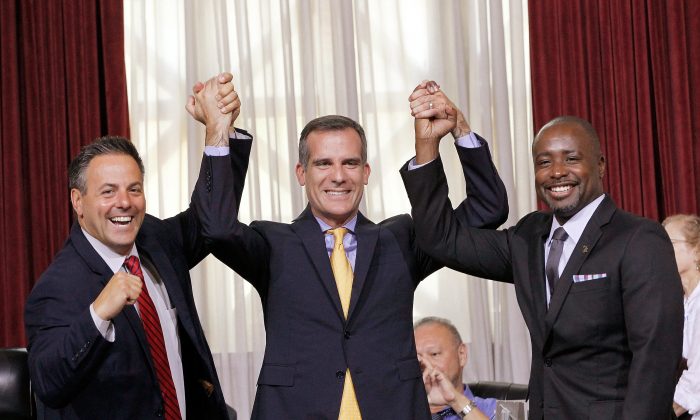 Los Angeles Back From Dead as US Candidate for 2024 Olympics

LOS ANGELES—Los Angeles is the official U.S. nominee for the 2024 Olympic games — a dramatic turnaround for a city that just two months ago was considered out of the running.

But with a late surge of life brought on by Boston’s dropout from the process, the city found itself on Tuesday as the U.S. candidate, and its leaders were left feeling inspired and destined.

“This is a quest that Los Angeles was made for,” said Mayor Eric Garcetti. “This city is the world’s greatest stage.”

Garcetti said Los Angeles, home to the Olympics in 1932 and 1984, would stage games that are both spectacular and profitable. He was given unanimous approval from his City Council to strike agreements for a 2024 bid, a move that was immediately followed by the U.S. Olympic Committee naming Los Angeles as its candidate.

“I want to thank Los Angeles for standing up, once again, as America’s bid city,” said USOC chief executive Scott Blackmun, who stood under a summer sun at Santa Monica Beach, where the city’s plan calls for staging beach volleyball on the site where the sport was founded.

The city’s selection as the U.S. nominee marks the start of a two-year competition. The International Olympic Committee will pick the host city in September 2017, and Rome, Paris, Hamburg, Germany, and Budapest, Hungary, are also in pursuit of the 2024 Games.

“The focus needs to be on convincing the 55 or so IOC members that Los Angeles is the best city to host the Olympics. That process starts immediately,” USOC Chairman Larry Probst told reporters in a conference call.

A key issue has been whether approval of the resolution by the City Council would saddle Los Angeles with potential cost overruns for an event that historically runs over budget. Council members were assured repeatedly that the approval starts a negotiation with Olympic officials and does not commit taxpayers to future spending to stage the Games.

“This is the engagement, not the wedding,” Council President Herb Wesson said.

The city’s 2024 plan, which outlines over $6 billion in public and private spending, calls for staging events from volleyball on Santa Monica Beach to mountain biking in Griffith Park, one of the nation’s largest urban green spaces. As was the case in 1932 and 1984, the Memorial Coliseum would serve as the centerpiece of the games.

A so-called host city contract, which essentially sticks the city and state — not the IOC — with the burden of any cost overruns, became an obstacle in Boston, which was dropped from contention in late July amid shaky public support and questions about taxpayer spending and liability.

For Los Angeles, negotiating and striking a host city contract would come later, if the city is selected to stage the 2024 Games. For now, that temporarily pushes aside looming questions about costs.

“We are in this to win it, and I think we will,” said Councilman Paul Krekorian. “We can’t do that at the risk of exposure to our taxpayers.”

Over the years, the Olympics have been notorious for cost overruns, and studies have questioned whether host cities benefit economically. Russia has been struggling with costs from the 2014 Sochi Olympics, which have been called the most expensive Olympics of all time.

Many financial details of the Los Angeles plan remain vague.

The bid calls for building a $1 billion athletes village on a rail yard the city doesn’t own, and government analysts have warned that developing the site could significantly exceed the projected cost.

A private developer would invest most of the $925 million to build the village, but who would build the site, how the company would be selected and what type of financing would be used is unclear. The plan refers to necessary environmental and planning studies, but no cost estimates are given.

City analysts last week said they didn’t have enough information to verify the overall 2024 budget or determine the financial risk.

The IOC had set a Sept. 15 deadline for cities to enter the race for the 2024 Games.