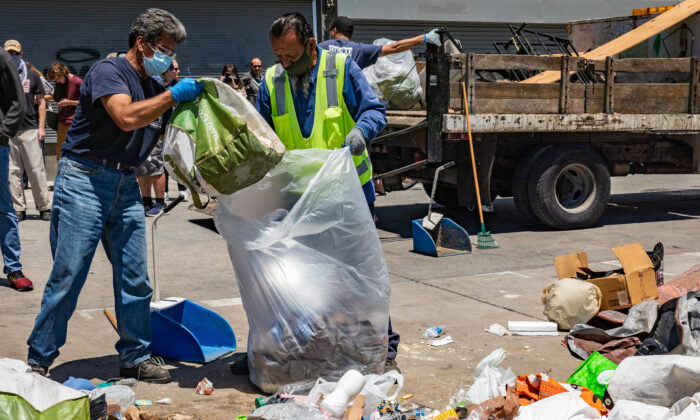 LOS ANGELES—The Los Angeles City Council approved on March 1 some components of a plan aimed at reducing illegal dumping throughout the city, including shortening the time it takes to deploy cleanup teams when a report is made about excess trash and debris.

“The city of Los Angeles is facing a crisis when it comes to trash, bulky items and illegal dumping. In every corner of the city, pieces of furniture, loose debris and trash piles are prevalent,” Councilman Kevin de León wrote in one of five motions introduced on Feb. 1 as part of his “Clean Streets Now” plan.

Four of the five motions were passed 11–0 on Tuesday. The fifth motion has not yet been considered by the council.

According to de León, the Bureau of Sanitation has nine two-person teams that deploy each day to handle illegal dumping cleanup. The Office of Community Beautification also provides funding to address loose trash and debris, and council district offices fund their own crews to address it as well.

“The city consistently pours more resources every year into cleaning the public right of way, but progress has been slow and the city is not moving the needle on neighborhood cleanliness,” de León wrote in one of the motions. “A better strategy is needed that integrates existing resources and adequately staffs the Bureau of Sanitation so that the city can more proactively address illegal dumping and trash.”

De León—who is running for mayor this year—also called for the city to address illegal dumping within 48 hours of it being reported or identified. Two of his five motions passed on Tuesday specifically involve illegal dumping. The remaining two are aimed at efficiently deploying Bureau of Sanitation teams that handle encampment cleanups and increasing the frequency of street sweeping in commercial and industrial areas.

The first motion specific to illegal dumping requests a report from the chief legislative analyst, the Bureau of Sanitation, and the Office of Community Beautification as to the resources needed to adequately address illegal dumping. It will also include the number of crews and the amount of funding allocated to address the problem from different sources, including council district discretionary funds. The Bureau of Sanitation was also instructed to create an integrated strategy to coordinate additional resources to respond to requests within 48 hours.

The second motion instructs the Bureau of Sanitation to update the council on the CleanState Street Indexing System and identify areas of the city with the highest rate of illegal dumping in each district. That report will also include data from MyLA311 calls for service and the amount of time it took for the area to be cleaned, as well as information on what resources are needed to reduce illegal dumping at the locations and make cleanups there more frequent.

De León also introduced a motion, which was not scheduled for the city council meeting on Tuesday, aiming at enforcing the city’s law against dumping and would have the Bureau of Sanitation and the City Attorney’s Office report on resources needed to establish an enforcement and prosecution program. The motion would also request a report on ways to deter illegal dumping, including through cameras in areas with high rates of dumping.

In August, the council voted to reconvene a previously formed interdepartmental illegal dumping working group following a report that found illegal dumping of trash and hazardous items in the city’s public areas increased 450 percent between 2016 and 2020. The group—which includes the Bureau of Sanitation, the Bureau of Street Services, the Los Angeles Police Department, and the Department of Recreation and Parks—is tasked with identifying trends and coordinating enforcement activities.

According to Controller Ron Galperin’s report, which was released on March 24, 2021, the Bureau of Sanitation is struggling to keep up with the increasing amount of waste dumped on sidewalks, streets, and alleys, and the waste is making it unsafe for all Angelenos.

According to the report, the Bureau of Sanitation’s resources are spread too thin because the bureau is charged with handling illegal dumping and cleanups of homeless encampments, and as a result, the average time it took sanitation crews to respond to illegal dumping requests in 2020 was five days.

The bureau has 19 surveillance cameras across the 470-square-mile city to catch illegal street dumping incidents.