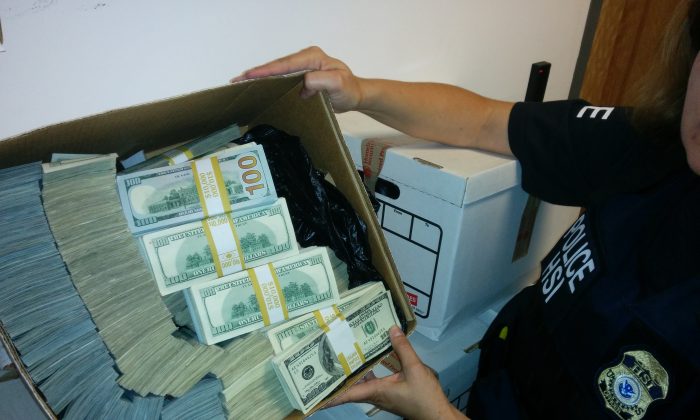 Bulk cash is seized by authorities during a downtown Los Angeles raid in the Fashion District on Sept. 10. (DOJ)
US

Seized drug money from the raid last Wednesday swelled from the initial count of $65 million to over $100 million, mostly in cash. The raid involved about 1,000 law enforcement officials from federal and local agencies.

“The proximity to the Mexican border, the fact that it [L.A.] is a major distribution hub for both narcotics and goods, the two kind of coalesce and come together within the fashion district,” said Kevin Lally, the assistant U.S. Attorney and chief of the Organized Crime and Drug Enforcement Task Force for the Department of Justice.

Businesses in the U.S. work with businesses in Mexico or South America in what authorities call a Black Market Peso Exchange scheme (BMPE). A drug dealer in the foreign country sells the drugs in the U.S., then gets a partner in the U.S. to give the proceeds to a local business. The business buys goods from the partner business in the foreign country, which is then handed over to the drug dealer.

“The city has always been a major hub for both legitimate and illicit commerce,” wrote Virignia Kice, spokesperson for the western region of the U.S. Immigration and Customs Enforcement (ICE) in an email.

“In particular, the local fashion sector is fallow ground for drug traffickers seeking to launder narcotics proceeds because the garment industry exports a significant volume of goods to Mexico and South America, where the cartels are based.”

Trade-based money laundering has spiked in recent years since the Mexican government limited the use of U.S. dollars in 2010. The BMPE is a simple way for drug traffickers to overcome that problem and move large amounts of money across borders without arousing suspicion.

In another case from the raid, officials alleged that fashion district business QT Fashion accepted ransom payments to help free a kidnapped U.S. citizen who was held hostage and tortured in Mexico. Relatives paid $140,000 in ransom in exchange for the release of the hostage, according to a press release by the central district of California U.S. Attorney.