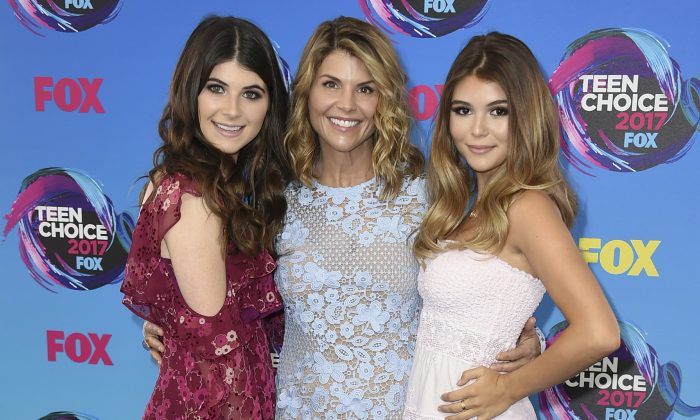 “At a minimum, the daughters will be witnesses in a trial against their parents, but they could also be charged as defendants,” ex-prosecutor Neama Rahmani told People magazine.

“The government has made it clear that they are going to keep increasing pressure on both Lori and Mossimo. By not pleading, Lori and Mossimo are exposing their children to being charged.”

Rahmani previously told Fox News: “The government has a ton of evidence here—they have incredible leverage over Loughlin and her husband and the daughters. And they have this leverage for a few reasons. If you review the evidence, it’s incredibly strong in terms of recorded phone calls, in terms of emails, financial records, and so forth.”

Olivia Jade Giannulli, 20, and Isabella Giannulli, 21, have not been charged by federal prosecutors. According to the indictments filed against Loughlin and Mossimo Giannulli, the girls’ father and Loughlin’s husband, both girls were aware of the scheme.

They each posed for pictures on a rowing machine as their parents arranged with nonprofit head William “Rick” Singer to get them into the University of Southern California under the guise of being recruits for the crew team, despite neither girl having competitive experience with the sport.

Olivia Jade was also copied in on an email in which Loughlin noted one of Singer’s associates compiled an application on the girl’s behalf.

Singer, who pleaded guilty to orchestrating the bribery scheme, created a fake profile presenting Olivia Jade as a crew coxswain for the L.A. Marina Club team, requesting from the family an “action picture” to place in the profile. Twelve days later, Giannulli emailed a picture of Olivia Jade on a rowing machine.

She was presented to the USC subcommittee for athletic admissions and was accepted as an athlete-student. “CONGRATULATIONS!!!” Singer wrote in an email to Giannulli and Loughlin. “Please continue to keep hush hush till March.”

Loughlin emailed Singer about a month later to request guidance on how to complete the formal USC application in the wake of Olivia Jade’s acceptance as a recruited athlete.

“[Our younger daughter] has not submitted all her colleges [sic] apps and is confused on how to do so. I want to make sure she gets those in as I don’t want to call any attention to [her] with our little friend [at her high school]. Can you tell us how to proceed?”

Singer then directed an employee to submit the applications on behalf of Olivia Jade.

The University of Southern California coach, Laura Janke, who created the fake athletic profiles for Loughlin’s children and other applicants pleaded guilty earlier this year to conspiracy to commit racketeering.

Rahmani told Fox that prosecutors wouldn’t have to prove whether Olivia Jade saw the email.

“There doesn’t have to be a smoking gun where she told someone either verbally or not that ‘I knew I was doing this,’” Rahmani said. “They can say there is circumstantial support that someone that is not an athlete, someone that doesn’t have the grades, someone that gets into USC and is supposedly participating in crew and having never rowed crew—they knew that they did not get in legitimately.”

Prosecutors have ratcheted up pressure on Loughlin and Giannulli, twice filing new charges against the couple. The latest charges, filed on Oct. 22, were for alleged conspiracy to commit federal program bribery.