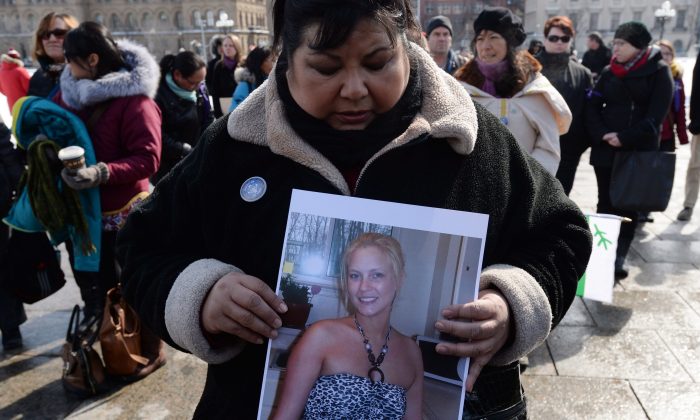 OTTAWA—It took the disappearance of a beloved cousin to bring Holly Jarrett and her estranged mother together after a year of silence.

After 26-year-old Inuit student Loretta Saunders vanished from Halifax on Feb. 13, Saunders’ mother called Jarrett and pleaded with her to make up with her mom.

“She explained that we’re a family, and Loretta knew my mom and I didn’t talk, and she would be very happy when she came home to know that such a good thing had come from her being missing,” Jarrett said Wednesday at a Parliament Hill vigil for her cousin.

“I’ve talked to my mother every day since.”

The day after Jarrett reconciled with her mother, Saunders’ body was found on the snow-covered median of a New Brunswick highway.

“Left there, a young, promising, talented, contributing aboriginal citizen of our country, of my community and my family, left on the side of the road,” said Jarrett as she choked back tears.

“Our precious little girl fought for justice for the very silent population of girls she’s now a part of.”

Saunders was an honours student at Saint Mary’s University when she disappeared. Two people have been charged with first-degree murder in her death.

One of them, 25-year-old Blake Leggette, appeared recently in a provincial court. The other, Leggette’s 28-year-old girlfriend, Victoria Henneberry, did not appear in court and was instead represented by her lawyer.

In a cruel irony, Saunders was writing a thesis on murdered and missing aboriginal women before she died.

Cheryl Maloney of the Nova Scotia Native Women’s Association, who spoke at the vigil, said she grappled with the question of who, if anyone, should finish Saunders’ work before coming to a realization.

“Maybe it wasn’t up to one person to finish Loretta’s thesis,” she said. “Maybe it was up to all of us as Canadians.”

Maloney and others at the vigil called on the Conservative government to hold a national inquiry into missing and murdered aboriginal women.

But while the Conservatives renewed funding to combat violence against aboriginal women and girls in their recent budget, they have so far resisted calls for a formal inquiry.

It is estimated there are hundreds of cases of missing and murdered aboriginal women dating back to the 1960s.

A United Nations human rights investigator called that statistic disturbing last year during a fact-finding visit to Canada in which he also urged the Conservative government to hold an inquiry.

James Anaya, the UN special rapporteur on the rights of indigenous peoples, said a national inquiry would ensure a co-ordinated response to the problem and allow the families of victims to be heard.