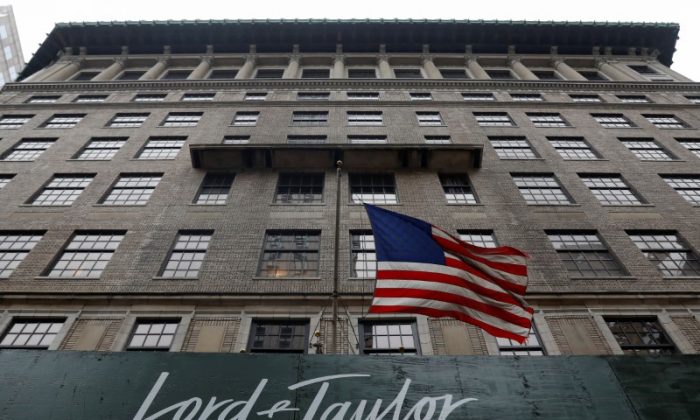 Lord & Taylor will no longer maintain a presence on Fifth Avenue, the retail chain’s parent company announced on June 5, as part of its move away from brick-and-mortar retail and toward online sales.

Helena Foulkes, chief executive officer for Canada-based Hudson’s Bay Company (HBC), said in a statement that Lord & Taylor would be moving from its iconic storefront, where it has been for the last 100 years, “for improved results and increased profitability.”

HBC sold the Fifth Avenue building last year to office rental company WeWork for $850 million, but retained the right to lease part of the building for a scaled-down Lord & Taylor store.

HBC, which also owns luxury department store Saks, announced in May its plans to sell Lord & Taylor apparel on Walmart.com, as part of its move toward online sales.

Walmart, retail giant Amazon Inc.’s greatest competitor, is redesigning its website to focus more on fashion, aiming to snare both the economical consumer with its “Everyday Brands” and high-spending consumers with its “Premium Brands.”

HBC said it will close another nine Lord & Taylor stores through 2019 and will also sell Gilt, a flash sale website that it acquired two years ago for $250 million.

Gilt made up just 4 percent of HBC’s sales in fiscal 2017, the company reported.

Like many other brick-and-mortar retailers, HBC has been struggling to compete with the ease and affordability of Amazon’s monstrous online retail business.

Sears Holdings announced at the end of May its plans to close 15 Kmart stores and 48 Sears stores this September, part of “approximately 100” unprofitable stores that it will shutter in the “near future.”

Children’s retailer Toys ‘R’ Us went into bankruptcy last year and announced it would either sell or close all 885 of its U.S. stores.

J.C. Penney Co. also announced last year its plans to close 138 stores “to adjust our business to effectively compete against the growing threat of online retailers,” Marvin R. Ellison, chairman and CEO, said in a statement.

The company said that closing its stores will allow it to “rethink the model and better position Lord & Taylor for future success,” as well as reduce costs.

“After evaluating best use scenarios for its New York City Fifth Avenue location, the company has decided not to maintain a presence at this location following turnover of the building to WeWork,” the company said.

Already this year, HBC has closed two Lord & Taylor stores, one in Annapolis, Maryland, and one in Skokie, Illinois.

According to Reuters, HBC could divest of Lord & Taylor completely. The company has considered the option, in talks with consultants about ways to turn around the department store chain.

HBC also closed Home Outfitters stores in Canada this year, one in Richmond and one in Toronto.

An HBC representative told CNN Money that the Fifth Avenue Lord & Taylor store will not close until early 2019.