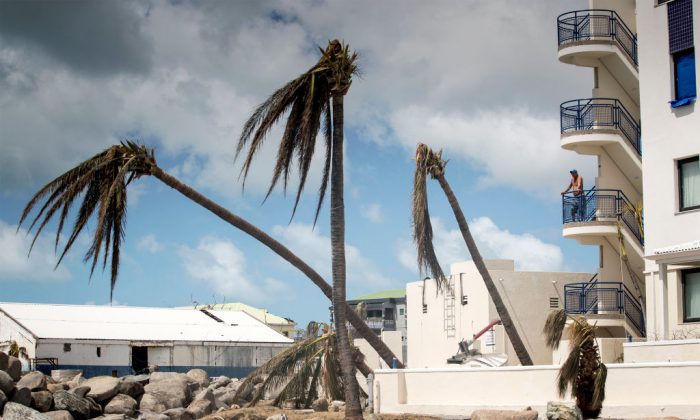 A man looks over the devastation of Hurricane Irma on the Dutch Caribbean island of Sint Maarten. (GERBEN VAN ES/AFP/Getty Images)
Americas

Reports of armed looters have emerged from hurricane-stricken St. Maarten, the southern half of a Caribbean island shared with the French territory of St. Martin.

The U.S. government, which has no embassy on the island, is trying to get the 5,000 American tourists on St. Maarten to safety. St. Maarten has been independent since 2010, but is still a commonwealth country of the Netherlands.

Tweets emerged from tourists about looters taking TVs from abandoned rooms, Daily Mail reported. Later tweets indicate criminals have gone after bigger gains and started robbing banks. An American woman shared stories with ABC of looters armed with swords stealing food from her hotel, beating up guests, and then robbing a bank and hiding in her hotel compound.

The manager of a bar on the island has been making desperate pleas for help via social media.
“[T]here are CRIMINALS carrying GUNS AND KNIVES SHOOTING and looting all over!!
NOTHING IS WORKING, THERE ARE NO RULES, THERE IS NO LAW AND NO PROTECTION RIGHT NOW!!”

A tourist from New York who was working on the island and narrowly escaped a building collapse from the hurricane told NBC he saw mass looting and violence on the streets by roaming gangs of 20 or 30 people.

“In the beginning, there was no police presence and there was no government organization, and so criminals and desperate people took advantage of that,” he said.

Dutch troops have been deployed to bring order back to their territory.

“Patrols appear to be effective in preventing or stopping looting and robbery,” the Dutch Foreign Ministry said in a statement, adding, “The prison on St. Maarten is now fully guarded by Dutch soldiers. Earlier rumors about escapes of prisoners are unfounded and not true.”

Meanwhile over 1,200 Americans have been evacuated, ABC reported. The Air National Guard has been sending American tourists to Puerto Rico via C-130 Hercules military aircraft. HH-60 Guard helicopters are also assisting. Winds from Hurricane Jose interfered with evacuation efforts on Sept. 9 and into Sept. 10, but have since resumed.

“Evacuation efforts will prioritize U.S. citizens needing urgent medical care, followed by a broad call with additional information other U.S. citizens remaining on the island,” said State Department spokeswoman Heather Nauert in a statement obtained by NBC. “We continue to advise U.S. citizens to shelter in place at a secure location until they have specific and confirmed departure plans.”

Tourists that managed to reach safety talked about cooperating with fellow guests stranded in a hotel, banding together in order to make it through without running water. They also shared stockpiled food.

One woman told ABC she rode out the hurricane in her bathtub, thinking she might die. Juan Brown, a 49-year-old Florida man staying in St. Maarten, managed to hide in a stairwell and a service elevator shaft at a hotel.

“It started taking on water towards the bottom, and people started panicking,” said Brown. “It was a very dangerous situation. … There were a lot of elderly people, a lot of kids crying, a lot of people gathering and holding hands.”