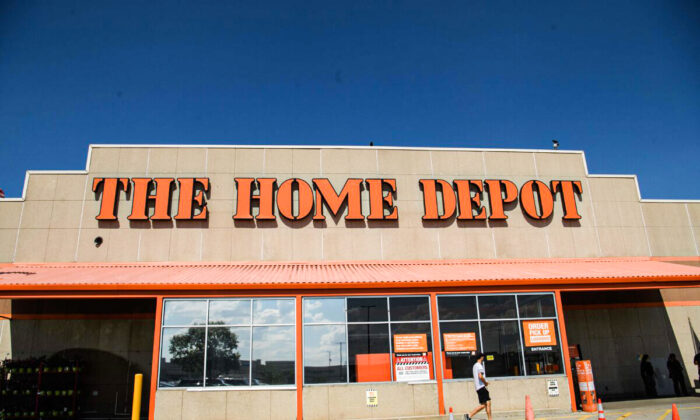 A Home Depot store is seen in Washington, on Aug. 18, 2020. (Nicholas Kamm/AFP via Getty Images)
Crime and Incidents

A group of young males wearing ski masks targeted a Lakewood, California, Home Depot at around 8:30 p.m on Nov. 26., making off with hammers, mallets, crowbars, and sledgehammers, officials told FOX11. In all, the suspects stole about $400 worth of items before fleeing in getaway vehicles, one of which was identified as a red Mercedes Benz with a severely damaged front end.

“We tried to stop them,” Home Depot employee Luis Romo told the station. “We closed the front entrance, and they put their sledgehammers up and whoever got in the way, they were going to hurt them.”

The Los Angeles County Sheriff’s Department told other local media outlets that the stolen hammers and crowbars could be used in other Los Angeles-area store robberies.

Also on Nov. 26, a large group of robbers entered a Bottega Veneta store on Melrose Avenue and used pepper spray against people who tried to stop them, while grabbing high-end merchandise there, officials told CBS. It’s not clear how the suspects entered the store or if any arrests have been made.

Sgt. Jeff Newman of the Beverly Hills Police Department said that officials received a call regarding several vehicles with no license plates near Beverly Drive and Dayton Way just after 9 p.m. on Nov. 26.

“We’re currently working with the Los Angeles County Sheriff’s Department to see if there is a link to the Lakewood Home Depot incident or any other crimes that have been committed,” Newman told CBS.

The Los Angeles-area incidents over the Thanksgiving holiday weekend follow robberies and looting incidents that occurred across the San Francisco Bay Area several days prior. A Nordstrom store in Walnut Creek was targeted by roughly 80 looters, while jewelry stores, pharmacies, a Louis Vuitton store, and other Bay Area establishments were robbed in brazen looting attempts recently.

The spate of robberies drew the ire of California Gov. Gavin Newsom, who vowed to place more police in other parts of the state.

Some people have speculated that the spate of lootings across the state is, in part, due to the controversial 2014 Proposition 47 referendum that reduced penalties for theft. Anyone who steals up to $950 in goods can only be charged with a misdemeanor, rather than a felony, under California law.