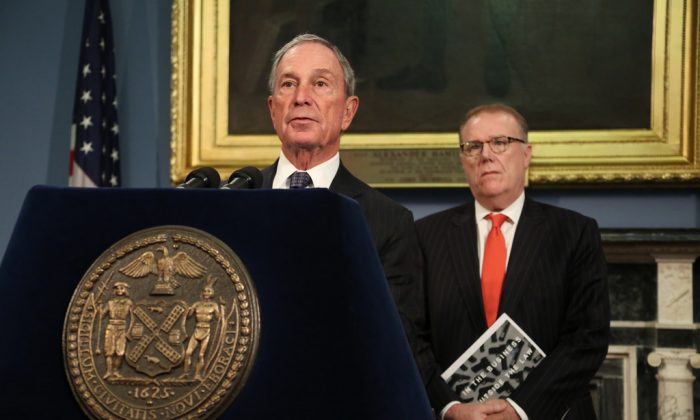 NEW YORK—A loophole that allows gun buyers to avoid background checks by purchasing online was uncovered by Mayors Against Illegal Guns in a report released Dec. 12. The findings were released days before the one-year anniversary of the Newtown shooting at Sandy Hook Elementary School where 20 children and six staff members were killed.

The mayor also wants to see a crackdown on websites, such as Armslist.com, who host gun ads. The report showed 29 percent of gun ads posted on Armslist.com were posted by high volume sellers who are not licensed, a violation of federal law.

“This is self protection. This is not a theoretical thing,” Bloomberg said at City Hall on Thursday. “Twelve thousand people per year are killed in America with illegal handguns and 19,000 commit suicide with handguns. We have to stop this carnage. We are the only major country in the world with this problem.”

Tuesday’s announcement was the final report issued by Mayor Against Illegal Guns under Bloomberg’s tenure. Since its inception in 2006, the coalition has grown from 15 members to more than 1,000 mayors across the country.

Being at the helm of one of the largest cities in the nation—all while dramatically reducing crime—has made Mayor Bloomberg the face of the organization. Even though he is leaving office, Bloomberg said Mayors Against Illegal Guns will continue to fight for sensible gun laws at the federal, state, and local levels.

“Rest assured, our work to pass sensible gun laws that keep firearms out of the hands of criminals and end the epidemic of gun violence in our nation will go on,” Bloomberg said. He added the time away from City Hall will allow him to focus on the issue even more.

When asked what his role in the coalition would be following his departure on Dec. 31, Bloomberg would not give specifics.

“You can rest assured I will devote extensive resources of my own and work very hard,” Bloomberg, on the wealthiest people in the world, said. “This organization is not going away.”

Bloomberg said he has not spoken to Mayor-elect Bill de Blasio about joining the coalition once he takes office on Jan. 1, but said de Blasio’s record on gun laws shows he should be supportive.

“Bill has been very much in favor of sensible gun regulations,” Bloomberg said. “I would hope he would join the mayor’s coalition, but he has other things on his mind at the moment.”