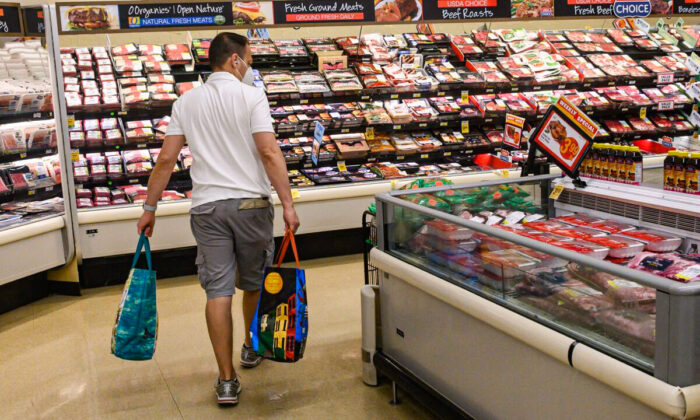 A person shops in a supermarket in Washington, DC, on May 26, 2022, as Americans brace for summer sticker shock as inflation continues to grow. (NICHOLAS KAMM/AFP via Getty Images)
By Kevin Stocklin

In its effort to contain inflation, the Federal Reserve has begun what many expect to be a series of interest rate boosts, which are already taking a toll on stock and housing markets, with job losses likely to follow. While Americans grow weary of record high gas and grocery prices, however, another round of price increases is making its way through the food supply chain and is expected to reach consumers this fall.

The 8.8 percent increase in food prices that Americans have already seen doesn’t take into account the dramatically higher costs that farmers are now experiencing. That’s because farmers pay upfront and only recoup their expenses at the point of sale, months later.

“Usually, what we see on the farm, the consumer doesn’t see for another 18 months,” said John Chester, a Tennessee farmer of corn, wheat, and soybeans. But with the severity of these cost increases, consumers could feel the effects much sooner, particularly if weather becomes a factor.

“Nothing that consumers are paying is going to bridge the gap for farmers right now,” according to Lorenda Overman, a North Carolina farmer who raises hogs and grows corn, soybeans, and sweet potatoes. She said the spike in fuel costs has put her farm into the red this year.

“The prices now have not hit the grocery stores yet,” but she expects they will start to by the end of summer.

Much of the cost of food hinges on the price of oil.

Chester said fuel and fertilizer together make up 55 percent of his total costs. The price of diesel fuel has more than doubled, to more than $5 per gallon today from $2.50 per gallon at the end of 2020. Farmers say the cost of fertilizer, an oil derivative, has tripled and in some cases quadrupled.

“When you look at the machinery that uses diesel, it’s farm equipment, it’s railroads, and it’s truckers,” said Daniel Turner, executive director of the energy advocacy group Power the Future. Diesel “moves all of our goods, it grows our food. From cargo ships arriving from overseas to trucks or trains getting those goods across the country, all those things now have added costs that will get sent to the consumer.”

“That surge in food and energy costs is very demand-destructive for U.S. households,” said Joseph Lavorgna, chief economist at Natixis, a European bank. “If you have to pay a lot more money for your food, to heat or cool your home, or put gasoline in your vehicle to get to work, there’s less money available elsewhere.”

Higher gas and food prices will leave Americans with less money to spend on other goods, which will reduce demand and create repercussions for the wider economy.

Economic reports are indicating that Americans are already unable to keep up with inflation. Household savings fell to the lowest rate in 14 years, as people struggle to maintain their standard of living. Credit card debt is hitting record highs, and retailers say they’re preparing for more consumers to limit their spending to the “bare-bones basics.”

While it’s possible that Americans’ loss of spending power may help to reduce inflation, some economists fear a return of 1970s-era “stagflation”: rising prices coupled with economic stagnation and increasing unemployment. That period of inflation was ultimately tamed by the Fed raising interest rates to nearly 20 percent.

In contrast to the Carter-era energy crisis, which was sparked by an embargo from foreign oil producers at a time of declining American oil output, today’s energy shortages are largely the result of domestic U.S. government policies, as the Biden administration attempts to force Americans to switch to alternative energy sources such as wind, solar, and electric from fossil fuels. This effort has included shutting pipelines, suspending oil and gas leases, and putting up regulatory roadblocks—all of which has reduced new investment in U.S. oil and gas production.

Last week, President Joe Biden stated that the spike in oil prices is “an incredible transition that is taking place that, God willing, when it’s over, we’ll be stronger and the world will be stronger and less reliant on fossil fuels.”

According to Energy Secretary Jennifer Granholm, rising oil prices are “an exclamation point” for the need to transition to wind and solar and “build homegrown clean energy.” Granholm previously stated that “if you drive an electric car, this would not be affecting you.”

With natural gas prices now hitting a 14-year high, the Department of Energy recently posted “a few tips on how you can prepare your home and office to safely navigate a blackout.”

Samantha Power, head of the U.S. Agency for International Development, said the solution to rising fertilizer prices is “natural solutions like manure and compost, and this may hasten transitions that would have been in the interest of farmers anyway. Never let a crisis go to waste.”

“That’s not the real world,” Overman said. “We are in the highest density for hog production in the nation and there’s not enough hog manure or turkey manure or chicken manure to fertilize our crops. We tried this fall to lock in some chicken and turkey litter to spread on our crops and there’s none to be had.

“There’s just not enough animals to produce the amount of fertilizer we need.”

“Energy is a very capital-intensive business, and we’re basically down to about half the level of cap-ex within energy that we had a couple years ago,” Lavorgna said. “A lot of that has to do with the fact that oil companies are not tone-deaf to what shareholders want, or more importantly what the regulators and politicians want.”

“It’s incredibly curious that of all [Biden’s] rhetoric, I have yet to hear anything along the lines of ‘We will do everything to increase production in America.’” Turner said. “They are comfortable with the current state because of their green philosophy, and we’re just necessary casualties.”

Together with ruptures in global supply chains, oil and food prices are a key reason why many economists think the Fed will have a particularly hard time taming inflation.

“There is a real risk the price [of gas] could reach $6 a gallon by August,” Natasha Kaneva, head of global oil and commodities research at JPMorgan Chase, told reporters. “U.S. retail price could surge another 37 percent by August.”

The higher prices climb, the more aggressive the Fed will need to be to contain inflation.

“We think the risks are skewed towards a much more significant recession, as inflation proves more persistent than is generally expected … the moves from the Fed currently envisioned by markets will be too slow to restrain inflation,” economists from Deutsche Bank stated in a research report titled “Why the coming recession will be worse than expected.”

One of the unique features of the current economic crisis is the extent to which it is driven by government actions, as opposed to a market failure. This includes trillions of dollars in federal spending to prop up an economy reeling from draconian government lockdowns that now appear to have had little success in containing the coronavirus. This spending was compounded by the Federal Reserve holding interest rates near zero while expanding its balance sheet to $9 trillion, flooding America with cash.

These problems were then further exacerbated by the Biden administration’s reregulating of the economy and its antipathy toward America’s fossil fuel industry, together with a Western boycott of Russian oil and fertilizer exports following Moscow’s invasion of Ukraine.

Inflation is the result of too many dollars chasing too few goods, and, in this case, it has been a “perfect storm” on both sides of the equation. As the Fed works to cool demand by raising rates, some economists say the Biden administration must reverse the policies it has put in place that are undermining productivity and holding back supply.

“If you want to address the inflation problem, you do it through the painful way of Federal Reserve action and higher interest rates and borrowing costs,” said Jonathan Williams, chief economist at the American Legislative Exchange Council. But, simultaneously, “you do it through the supply side, which reduces taxes and gets productivity back up across the United States.”

Given the federal government’s reluctance thus far to take the necessary steps, some states have created their own solutions, Williams said. Since March, four states—Iowa, Mississippi, Georgia, and Arizona—have gone from progressive income tax rates as high as 8 percent to flat tax rates in the range of 2 to 4 percent. North Carolina eliminated its business income tax, and nine other states currently have no state income tax.

Asked what Biden could do to help farmers, Allen said, “Lower the fuel prices. It will save the middle-class people. It will help them when it comes to buying food.”