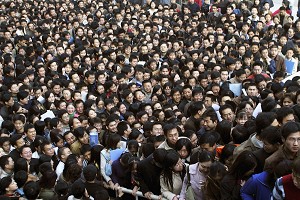 China has expressed concern about the present unemployment situation becoming even more dismal. Labour supply exceeds demand and this crunch could soon involve 13 million people. Observers pointed out that the number of unemployed far exceeds the figures reported by the regime. China needs to actively implement structural reforms. Otherwise, should a large domestic or international economic fluctuation occur, the resulting masses of unemployed people would negatively impact Chinese politics, society, and economy.

A few days ago, China's Minister of Labour and Social Security, Tian Chengping, said that the severity of China's unemployment problems and the complexity of the situation have not been experienced by any other country.

Tian said the grim situation is the result of a severe imbalance between supply and demand and an outdated labour market structure. The rapid influx of workers from rural areas to urban centers worsened the situation in cities that were already bulging with unemployed workers.

China's official statistics show that in the next few years, job seekers in urbanized areas will remain above 24 million but new positions and openings from attrition are predicted to be only 11 million—which could result in more than 13 million people without jobs.

Another reason for an increase in the number of job seekers is downsizing of state enterprises, which was reported to have let go 2 million people in late 2005. In the next three years, over 3.6 million state employees and 4 million from collectively-owned enterprises will join the masses of unemployed.

It was predicted that in the year 2006, 1.24 million university graduates would be unable to secure a job and on the top of that, over 100 million rural workers are also waiting to be hired.

According to Dr. Liu Xiaozhu, a Chinese scholar specialising in political science and sociology and now residing in the US, the situation in China is far worse than the regime has stated. “In reality, the situation is more severe than the figures given by Minister Tian. We estimate that the number of unemployed university graduates is at least 5 to 6 million. There is also the danger of further downsizing. In reality, if state-owned enterprises continue to decline, the unemployment situation will escalate, bankruptcy will become evident, the number of unemployed workers will increase,” said Liu.

Mistake of the Reform Policies

Liu said that although China's economy has developed rapidly, its structural reforms have not kept pace. Hence, problems of adaptability not being in synch with the rapid economic development have appeared.

Restricting the development of small to medium-sized entities shows up as discrimination in obtaining loans from state-owned banks. China's rapid economic development is mainly dependent on direct foreign investment and construction projects of basic infrastructures. However, the regime's policy of upholding a socialist economy resulted in foreign investments and basic infrastructure construction failing to nurture the development of small and medium-sized entities. In the future, the accumulated employment problems will worsen.

Faced with such a severe employment situation, how can China resolve this problem?

Liu said, “There is no foolproof perfect solution except to make a resolute decision to take further steps in the market economy and encourage the development of smaller enterprises. Break through the monopoly created by collusion between power and business. The second solution is to speed up the construction of small towns and cities.”

According to official statistics, the unemployment rate in the first nine months of 2006 was only 4.1 percent. Although this figure is low compared to the 15 and 30 percent unemployment rate in urban and rural areas respectively as stated by analysts, the regime has admitted that the immense pressure of unemployment is expected to become the most acute, long-standing problem confronting China's economic and social development.

Liu warns that should a huge fluctuation occur in China's domestic economy or if a great variation in the world's economy happens, especially in the US economy which has a huge trade deficit with China, the masses of unemployed will create a serious impact on China's political and economic structure.