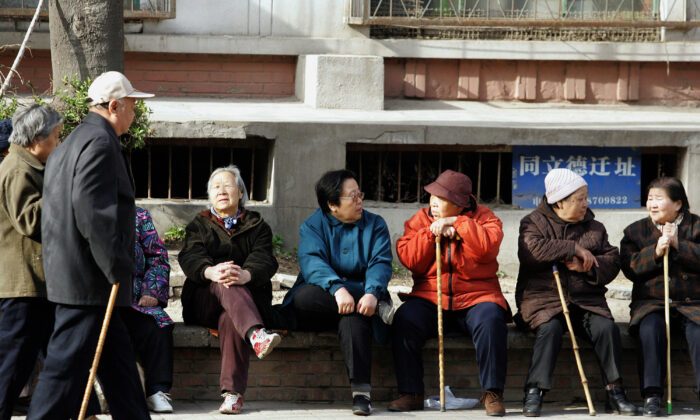 A group of elderly people enjoys a day in Beijing, China on 7 April 2007. China will expand its social security fund to at least $200 billion within a decade in a bid to meet the surging demand for pensions from its aging population, as the country currently has 144 million people who have already passed their 60th birthday, accounting for half of Asia's entire population in that age group, while another 100 million will be added roughly every 15 years and after 2030 the population that will be in the labour force to support those who are either too young or too old to work will shrink to less than half. (AFP/AFP via Getty Images)
China

China’s seventh national population census showed that 44.3 percent of its cities have an aged population.

On Sept. 5, China Business Network, a Chinese state-owned media, reported that 149 out of 336 censused cities in China had entered the designation of being an aged society, which accounted for 44.3 percent of the censused total.

The 149 cities are primarily in the northeast region, the central region, the Yangtze River Delta, the middle and lower reaches of the Yellow River, and the Chengdu-Chongqing City Group. Forty-one percent of the cities are in the eastern coastal area, accounting for 27.5 percent; 36 in the northeast, making up 24.2 percent; 72 in the central and western regions, 48.3 percent.

According to the census data released by the State Council of the Chinese Communist Party (CCP) on May 11, China has a total population of 1.4 billion (1,411,778,724), of which 190 million (190,635,280) is over the age of 65, accounting for 13.5 percent of the population. The overall population is only 0.5 percentage points away from becoming an aged society. Compared with the sixth national census ten years ago, the number of people over 65 has increased by 4.63 percent, suggesting a significant acceleration in the aging population.

China’s seventh census data was initially scheduled for release in early April but was delayed for more than a month. It is unknown whether the CCP tampered with the data before making it public.

Before the implementation of the three-child policy, families were only allowed to have two children. But the China’s National Health Commission in June said a large portion of families still decided not to give birth despite wanting another baby, due to the high costs of raising a child in China.

The aging population will bring about a decline in the labor force. China’s current legal retirement age is 50 for women in blue-collar, 55 for women in white-collar, and 60 for most men. A small number of senior intellectuals are allowed to work until 65. If the average age of retirement is 60, those born in 1961 will retire this year.

Yuan Xin, a professor at the Institute of Population and Development of China’s Nankai University, told Red Star News, a Chinese state-owned media, that the decrease in the labor force will increase the price of labor, which, coupled with the increase in the elderly population that requires pension, will result in an enormous economic burden.