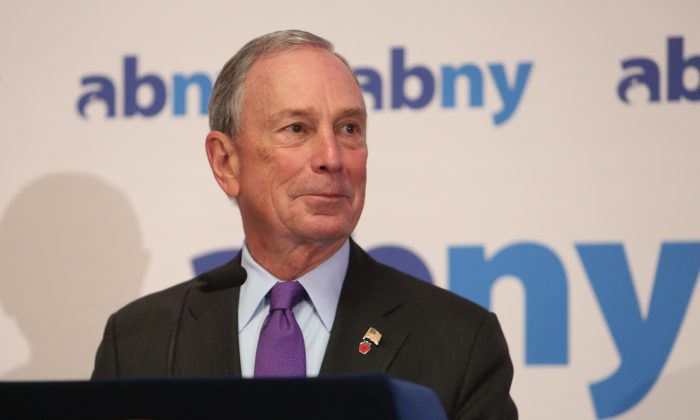 Looking to the Future, Bloomberg Reflects on NY Values

NEW YORK—With his daughter Georgina expecting a son before the year’s end, Mayor Michael Bloomberg looked forward to New York’s future and the city his grandson will know.

In his final power breakfast with the Association for a Better New York (ABNY) Bloomberg shared the core values he believes have guided New York’s past and he hopes will guide its future.

“Our administration has worked to honor and extend those values every day for nearly 12 years now. And that, more than anything else I think, is the legacy I’m most proud of. It is the greatest legacy that I can leave for my children and grandchildren,” said Bloomberg at the Brooklyn Marriott. “They inspire us to do right, and even when it’s unpopular or politically difficult they guide us.”

“First, New York must always strive to be the most open city in the world. The Lady who stands in our harbor, holding aloft the lamp of liberty, is more than a symbol of American freedom. She is our city’s patron saint.

“Today, when people are sick or hurting and ask for assistance, we don’t ask them for their immigration papers. We help them.

“We are one city—open to all, with equal rights for all. That has been our past—and it must always be our future.

“But the biggest risk we face, I think, is a quieter kind of threat, one that is sometimes harder to recognize, and convenient to ignore: it is the risk of failing to stay true to the values that made our city great, the values that make New York New York.”

Bloomberg was greeted with a standing ovation before as well as after he spoke.

“I’m looking forward to holding the baby in my arms— and looking into his eyes and saying to him: ‘This is your generation’s city now. It’s the greatest city in the world. Don’t screw it up.’

“And I am fully competent to change diapers, if anybody wants to know. As a matter of fact, George won’t like me for saying this, but I changed her diapers.”