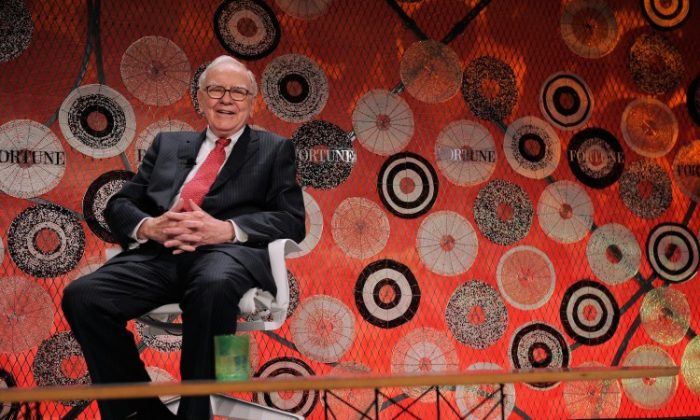 Warren Buffett attends the Fortune Most Powerful Women summit at Mandarin Oriental Hotel on October 5, 2010 in Washington. Buffett and other billionaires in the United States could soon pay the same amount in taxes as middle class Americans. (Jemal Countes/Getty Images)
Opinion

Looking for Fairness in the Buffett Rule

President Obama’s proposed tax on millionaires has been nicknamed the “Buffett Rule,” after billionaire Warren Buffett. Republicans claim it is class warfare. What is this controversial proposal all about?

In lobbying for the proposal, the president explained in his State of the Union address last week: “Right now, Warren Buffett pays a lower tax rate than his secretary … If you make more than $1 million a year, you should not pay less than 30 percent in taxes.”

He also defended against Republicans’ vehement criticism of the Buffett Rule, “Now, you can call this class warfare all you want. But asking a billionaire to pay at least as much as his secretary in taxes? Most Americans would call that common sense.”

On Wednesday, Democratic Sen. Sheldon Whitehouse introduced a Buffet Rule bill into Congress, with the title “Paying a Fair Share Act of 2012.”

It’s a simple enough idea. The president has said that even former Republican President Ronald Reagan would have supported the Buffett Rule.

According to official records, President Reagan spoke in 1995 in Chicago Heights, Ill., recalling a letter he received that sounds strikingly similar to President Obama’s Buffett story.

Reagan said, “An executive who’s earning in six figures—well above $100,000 a year. He wrote me in support of the tax plan because he said, ‘I am legally able to take advantage of the present tax code—nothing dishonest, doing what the law prescribes—and wind up paying … a smaller tax than my secretary pays.’ And he wrote me the letter to tell me he’d like to come to Washington and testify before Congress as to how that’s possible for him to do and why it is wrong.”

The former president concluded: “Well, right is right, and fair is fair, and it’s time for all of us to put on our American citizen hats and do the right thing for America.”

But there are distinctions between Buffett’s secretary and the secretary referred to by Reagan. A lot has changed in America in the last 25+ years.

For example, in another speech from 1985, Reagan similarly spoke out for tax fairness, saying: “In theory, some of those [tax] loopholes were understandable, but in practice they sometimes made it possible for millionaires to pay nothing, while a bus driver was paying 10 percent of his salary, and that’s crazy. It’s time we stopped it.”

Presumably, Reagan—who famously stated “Government does not solve problems; it subsidizes them”—would be more appalled that any American, rich or middle-class, is paying 30 percent of their income in taxes. Today, most rich and middle class Americans would probably welcome a Reagan-era tax rate of 10 percent.

While President Obama touts the Buffett Rule’s common-sense fairness, the Heritage Foundation, a conservative think tank, claims that the numbers the commander-in-chief uses are misleading in multiple ways.

First, Warren Buffett is able to pay a lower tax rate than his secretary because he is earning his money through capital gains, which means the income comes from monies earned on investments. The tax rate for capital gains is only around 15 percent, which is lower than the tax rate for regular income. Thus, on the surface, he pays a lower percentage to the IRS.

But, the money earned from capital gains is already being taxed, since it comes from the profits of companies paying regular income tax.

“Before [Warren Buffett] enjoys those gains, the businesses that generate them pay the highest-in-the-world 35 percent corporate income tax rate. In reality, Buffett pays 50 percent on the income he earns—far above the rate his secretary pays,” wrote Curtis Dubay, a senior policy analyst at Heritage, last week.

Second, on Sunday, Heritage released a chart showing how the top 1 percent of American earners, like Buffett, shoulder 38 percent of all the income tax the federal government collects. Using data from the Tax Foundation and the IRS for 2008, they found that the lowest earning 49 percent of Americans didn’t pay any federal income tax at all.

While Buffett and other top earners no doubt have more disposable income, the Heritage chart turns the Buffett Rule’s idea of fairness around. In terms of the percentage shouldered, the top earners—and even anyone above the 49 percent of bottom earners—is paying what could reasonably be considered an unfairly high share of federal income taxes.

“President Obama used his State of the Union address Tuesday to outline his idea of fairness,” writes Heritage blogger Rob Bluey. “To put it simply, that means redistributing wealth by raising taxes on the most successful Americans.”